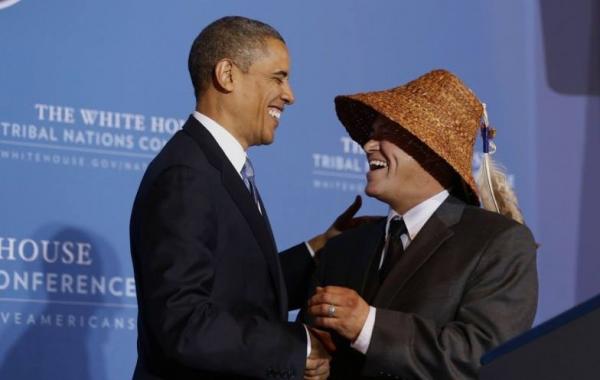 But he hopes that introduction will open the door to negotiation of an agreement for the repatriation of Native American objects in French museums.

Cladoosby, chairman of the Swinomish Tribe, and his wife Nina were invited by President Barack Obama and Mrs. Obama to the state dinner being held in honor of the French president.

During the French president’s visit to the U.S., Obama and Hollande “will discuss opportunities to further strengthen the U.S.-France security and economic partnership,” Obama said in a statement posted on www.whitehouse.gov.

“Michelle and I look forward to welcoming President Hollande … on a state visit to the United States,” Obama said.

“The United States and France are close friends and allies, including through NATO, and our countries have worked together to support democracy, liberty, and freedom at home and abroad for more than two centuries.”

The state dinner comes two months after a French judge’s decision to allow an auction house in Paris to sell 24 sacred Native American artifacts, despite the protests of the Hopi Nation, the U.S. Embassy, and indigenous civil rights organization Survival International.

The Annenberg Foundation intervened, submitting a winning bid of $530,000 U.S. for the sole purpose of returning the objects to their rightful owners – 21 items belong to the Hopi Nation, three to the San Carlos Apache.

The Native American Graves Protection and Repatriation Act gives indigenous nations in the U.S. a way to reclaim funerary objects and ceremonial items from federal agencies and museums in the United States. The law, however, does not apply to items held internationally.

Christopher Marinello, executive director and general counsel of Art Loss Register London, the world’s largest private database of lost and stolen art, antiques and collectables, told ICTMN in April 2013 that the Hopi and Apache objects should have been repatriated under the 1970 UNESCO Convention on the Means of Prohibiting and Preventing the Illicit Import, Export and Transfer of Ownership of Cultural Property. France ratified the convention in 1997.

According to the convention, “the [Hopi and Apache] pieces should have been pulled off, parties should have had a discussion to see which pieces could be sold, which were not genuine, what were the moral claims, what was important to the tribe, what is the compensation,” Marinello told ICTMN.

Marinello said there are no international agreements specifically addressing Native American artifacts, and said “it is something that the Americans should be convening and discussing because the laws in the USA protecting those Native artifacts have no weight overseas.”

That’s what Cladoosby hopes to initiate, noting, “We want to ensure our most sacred items are treated the same way” as those covered by other repatriation conventions.