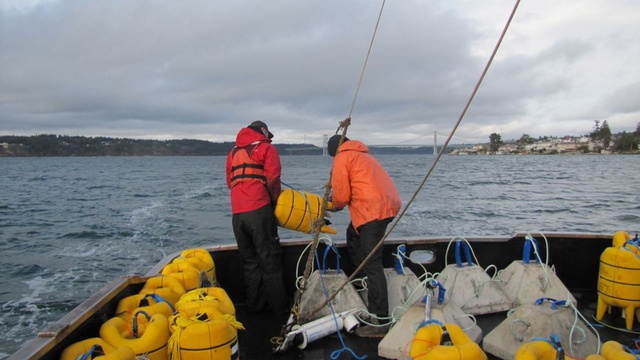 The crew of the research vessel Chasina gets ready to drop an acoustic telemetry receiver 300 feet down into Puget Sound. The device will record tagged steelhead as they swim out of their spawning rivers. | credit: Ashley Ahearn

TACOMA, Wash. — You might call Barry Berejikian a steelhead stalker.

The government scientist’s pursuit of these anodramous trout has brought him to the deck of the Chasina, a research vessel that’s motoring through choppy gray waters of southern Puget Sound near the Tacoma Narrows Bridge.

He’s here to lay the groundwork for an experiment that could explain why so few steelhead are completing their journey through Puget Sound and on to the Pacific Ocean.

Since 2007, Puget Sound steelhead have been listed as threatened under the Endangered Species Act. Millions of dollars have been spent improving their habitat but the fish are not recovering.

And scientists can’t pinpoint why. 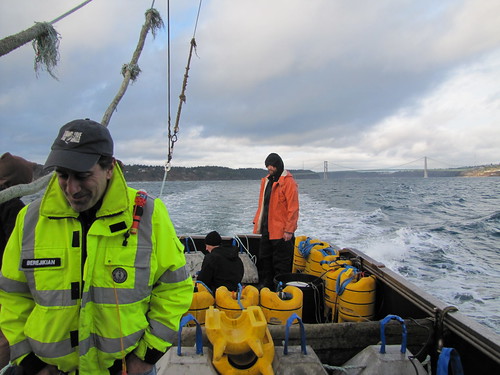 Berejikian is surrounded by keg-sized yellow buoys as he stands on the ship’s deck. These buoys are equipped with acoustic telemetry receivers and roped up to 500-pound concrete weights. The crew uses a crane to lift the devices over the side of the boat and drop eight of them 300 feet beneath the waves in a staggered line across Puget Sound.

Once they’re in place, the receiver buoys will float 20-30 feet above the bottom “listening” for fish. Later this spring, Berejikian plans to tag 300 juvenile steelhead in the Nisqually and Green rivers.

The floating receivers will record the tags when the fish pass by, enabling scientists to track individual fish as they make their way north through Puget Sound en route to the Pacific.

These arrays will be set up at four other points in Puget Sound, to chart how far the fish make it once they leave their spawning rivers.

“We want to detect every fish that comes through,” said Berejikian, who works for the National Oceanic and Atmospheric Administration. “It’s kind of an aggressive approach but if you’re going to go to the trouble of doing the study you might as well go for it, so we’re going for it.”

The rivers in this part of the Puget Sound region are producing tens of thousands of juvenile steelhead every year. But scientists believe that only 20 percent of those fish complete their migratory route to the ocean. That has scientists curious about the locations of steelhead death “hot spots” as Berejikian calls them.

“We need to figure out why they’re dying and where they’re dying in order for us to work on management approaches to improving the situation,” Berejikian said.

If you’re a steelhead on your way out of Puget Sound this might be what comes to mind when Berejikian says “death hot spot”: 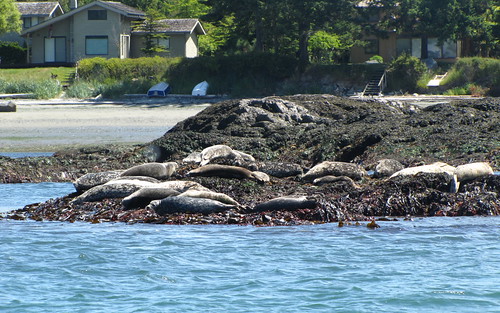 Harbor seal populations have boomed since the 1970s, prompting scientists to explore whether seal predation is contributing to steelhead mortality. Credit: Ashley Ahearn.

“They eat all salmon species, which would include chinook, coho, steelhead, chum and pink salmon,” said Steve Jeffries, who has studied harbor seals with the Washington Department of Fish and Wildlife since the 1970s. Jeffries added that there could be other animals preying on the steelhead, like sea lions, cormorants or harbor porpoise, whose populations are also on the rise in Puget Sound.

And of course there are other factors at play: Human population has increased in Puget Sound since the 1970s, as has development along rivers and coastlines.

But seals are still on the list of suspects and one thing’s for certain: there are more seals than there used to be.

Since the passage of the Marine Mammal Protection Act in 1972, harbor seal populations in Puget Sound have risen from roughly 2,000 in the early 1970s, to 13,000 today.

In conjunction with Berejikian’s steelhead tagging, Jeffries plans to tag 12 harbor seals this year. The tags on the seals will track their movements. They’ll also act as receivers, like the floating buoys on the bottom of Puget Sound, recording if there are any tagged steelhead that come within range.

“If we find out that the seals are feeding over here and the steelhead smolts are swimming through the same area then you’ve got this special overlap and it’s more likely that there is a predation going on,” Jeffries explained.

And if the seals are eating the out-migrating juvenile steelhead?

“I don’t know the answer to that question,” Jeffries said. “Harbor seals, all marine mammals, are protected so any action that would come out of this would have to be vetted in a resource management arena.”

Jeffries said right now it’s too early to say if seals are a major contributor to steelhead mortality in Puget Sound. “It’s a long time in the future ‘til we would actually do anything proactive to reduce predation.”