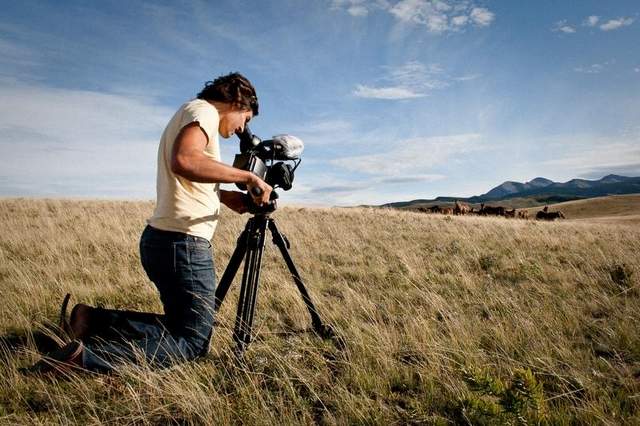 Nicolas Hudak films in 2009 during the production of ‘Where God Likes to Be.’ / Photo by Nicolas Hudak

“Where God Likes to Be” is a film that captures both the hope and the hardship of life on the reservation.

Filmed over the course of a single summer, “Where God Likes to Be” is a documentary filmed and produced by Nicolas and Anna Hudak. The movie premiered at the Big Sky Documentary Film Festival in Missoula this past week, but its genesis stretches back 10 years ago to when the Hudaks found themselves stranded in Browning by a late winter snowstorm.

Growing up in Kalispell, Nicolas had heard all the stereotypes about Browning: The reservation was dangerous and the last place a white person would want to spend the night. But what he and his wife experienced was altogether different. They were greeted with generosity and hospitality.

“That changed my perspective on all those ideas that I had growing up,” Nicolas Hudak said of his stay in Browning. “Yes, there’s definitely a lot of hardships going on — as there has been for the last 100 years or more. It’s a pretty tough spot to make a living. But there are a lot of good people doing good stuff and just trying to get by.”

In 2009, the Hudaks returned to Browning to document the lives of three young people: Andi Running Wolf, graduating from Heart Butte High School and preparing to go to college at the University of Montana; Doug Fitzgerald, a Blackfeet cowboy from Babb working to support his young family; and Edward Tailfeathers, a young man from Browning debating whether to stay on the reservation or leave in search of greater opportunity elsewhere.

The stories of these three people could easily be transposed to nearly any community in the United States. Running Wolf struggles with homesickness and fitting in at college. Fitzgerald comments that becoming a husband and father came sooner than he was expecting. Tailfeathers worries about finding a job and passes the time singing in a band with his friends.

“Where God Likes to Be” emphasizes the similarities its three characters share with young people throughout the United States, viewed through the lens of life in a community where hope and opportunity are frequently in short supply.

WHERE GOD LIKES TO BE Teaser from counter production on Vimeo.

However, each of the three characters is deeply aware that the choices they make have the potential to lead them away from the reservation. Each voices concerns about the risks of leaving, and possibly weakening their sense of identity as Blackfeet.

“Everyone I know is here. Everything I have had is here,” Tailfeathers says as he contemplates moving away from Browning. “It’s part of the connection of who you are.”

“Here we are at this cusp of change, and there are two ways this could go,” Hudak said of the decisions his characters face. “One is that everybody just becomes culturally homogenized and there’s really no difference between Blackfeet and anybody else. Or, they can try to hold on to what’s left. This is basically the last generation that has any kind of chance of saving those things that make the culture unique.”

“Then again, they are just American kids growing up in America,” he adds.

Within the first few scenes of “Where God Likes to Be” the viewer is introduced to the film’s fourth main character: the landscape of Blackfeet Indian Reservation. Hudak’s cinematography intersperses sweeping vistas of the Rocky Mountain Front with intimate glimpses of life in Browning and Heart Butte.

“Andi, Doug and Eddie are the heroes of the story, but certainly the landscape is the overseer of everything,” he said. “Part of the reason we wanted to make this film about the Blackfeet in particular is because that area is just so spectacular. There is just something so dramatic and so poetic about the way Browning looks in contrast with Glacier Park. I feel that beauty lies not just in fabulous sunsets, but also in those heavier human elements.”

“If we didn’t teach or learn all these old ways — religion, culture, language — then what are we?” Fitzgerald asks toward the end of the film. “Just a name. This will be a story in a book someone will pick up here and there. I always want to be. Be here. I want to be here where it started and never die, so that my kids will have a good place and be proud of where they’re from.”

Fitzgerald’s words could have just as easily been spoken by any of the young people featured in the film.

As a small budget film, “Where God Likes to Be” is not likely to show at a local multiplex cinema any time soon. To keep track of where the movie is playing, log on to the movie’s website at http://www.wheregodlikestobe.com.