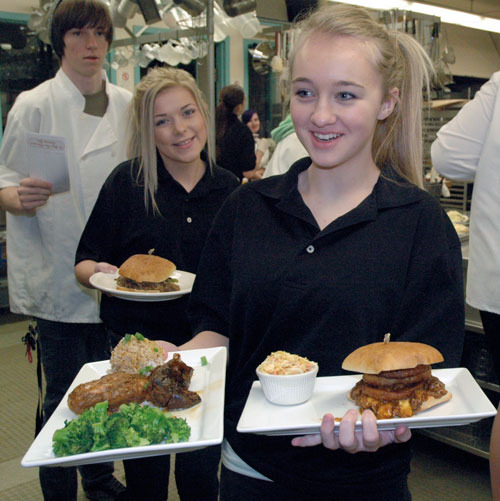 MARYSVILLE — The School House Cafe at Totem Middle School has undergone a few changes this year, as former Seattle chef Jeff Delma makes his way through his seventh year of coordinating the student cooks in the kitchen.

“We’ve got a new paint job and a new look, but we’re not done touching it up just yet,” said Delma, who credited Brian Murrill as one of the key contributors to the student-run restaurant’s mid-school year renovations.

“It’s made the School House Cafe a nicer place to eat at,” said Ariel Williams, a senior at Marysville-Pilchuck High School, who hopes to pursue cooking as a career.

“It has been looking a little worn down,” said Natalie Vinson, a senior at the Marysville Getchell High School Bio-Med Academy, who also comes from a family of cooks, but is more interested in cooking as a hobby.

“We already offer gourmet food from high school students,” said fellow Bio-Med Academy senior Ian Wahlgren, who enrolled in the program because “I want to learn how to cook so I can live on my own.”

Regular patrons will also notice a new menu at the School House Cafe, complete with its own blend of coffee. Vista Clara Coffee of Snohomish has created the “Caffe’ Diem” blend for the local student-run restaurant, offering what Delma described as a “deep, dark and beautiful” flavor. Likewise, while familiar favorites such as the house-smoked barbecue pulled-pork sandwich, paninis, and fish and chips are still available, they’ve been joined this year by new selections such as the spicy shrimp wrap, which bundles crispy shrimp, lettuce, tomato and spicy mayo in a flour tortilla.

While Wahlgren rates the spicy shrimp wrap as his own first choice to order, Williams is more partial to shepherd’s pie, and Vinson prefers the simplicity of the School House Cafe’s salads.

“I would come here on my own time even if I wasn’t working here, because the food is just that good,” Vinson said.

“Plus, the people are as friendly as they can be,” Williams said. “We’ve all made new friends here.”

Indeed, even though many students go to different schools, or different Small Learning Communities, they all agreed that their close-knit working relationships at the School House Cafe remind them that they’re all part of the same Marysville school community.

“It doesn’t feel like coming to class when you come here,” Wahlgren said.

Which is not to say that culinary education isn’t emphasized during students’ hands-on experiences at the School House Cafe, since Delma has also been throwing middle school students into the mix.

“They’re only here for relatively short periods, but it gives them a taste of what it’s like, and increases their awareness,” Delma said. “We don’t want incoming high school freshmen to get lost in the shuffle.”

“This connection offers our program a direct pipeline to hundreds of professionals, who are available for mentor relationships, career and education advice, as well as professional, hands-on guest instruction,” said Donneta Spath, the Marysville School District’s Career and Technical Education Director. “This partnership will also allow Chef Delma to share ideas, information and teaching strategies with hundreds of schools across the country, via online forums and databases.”

As valuable as these programs and benefits are to the students and the community overall, perhaps the most important aspect of the School House Cafe to its customers is how well it serves them as a local restaurant.

“I used to come here all the time,” said Betty Berger, whose workplace was previously located adjacent to the School House Cafe. “They were so very nice to me. When I had a leg injury, they even brought my meals to me. It’s been years since I came here regularly, but with as good as the food is, I’ll be bringing my girlfriends back with me tomorrow.”

The School House Cafe is located at 1605 Seventh Street, on the south side of Totem Middle School, and is open from 12:15-1:30 p.m. Tuesdays through Thursdays. Senior citizens are encouraged to ask for a 10 percent discount. For more information, call 360-653-0639.