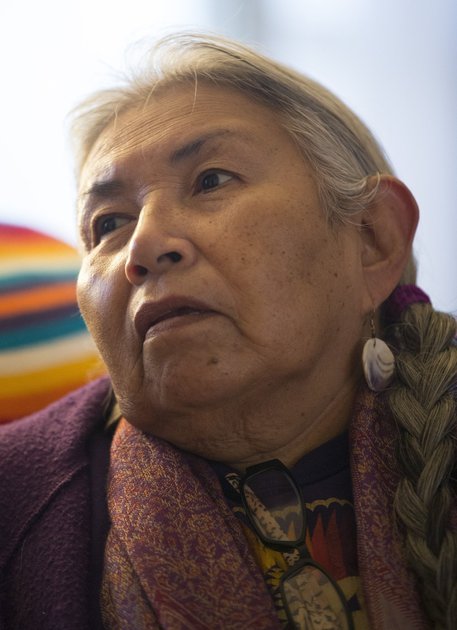 WASHINGTON — Faith Spotted Eagle figures that building a crude oil pipeline from Canada to the U.S. Gulf Coast would bring little to Indian Country besides more crime and dirty water, but she doubts that Native Americans will ever get the U.S. government to block the $7 billion project.

“There is no way for Native people to say no – there never has been,” said Spotted Eagle, 65, a Yankton Sioux tribal elder from Lake Andes, S.D. “Our history has caused us not to be optimistic. . . . When you have capitalism, you have to have an underclass – and we’re the underclass.”

Opponents may be down after a State Department study found that the proposed Keystone XL pipeline would not contribute to global warming. But they haven’t abandoned their goal of killing what some call “the black snake.”

In South Dakota, home to some of the nation’s poorest American Indians, tribes are busy preparing for nonviolent battle with “resistance training” aimed at TransCanada, the company that wants to develop the 1,700-mile pipeline.

While organizers said they want to keep their strategy a secret, they’re considering everything from vigils to civil disobedience to blockades to thwart the moving of construction equipment and the delivery of materials.

“We’re going to do everything we possibly can,” said Greg Grey Cloud of the Rosebud Sioux Tribe, who attended a two-day conference and training session in Rapid City last week sponsored by the Oglala Sioux Tribe called “Help Save Mother Earth from the Keystone Pipeline.” He said tribes are considering setting up encampments to follow the construction, but he stressed that any actions would be peaceful. “We’re not going to damage anything or riot or anything like that,” he said.

Like much of the country, however, tribal members are divided over the pipeline. In South Dakota, the battle pits those who fear irreversible effects on the environment and public safety against those who trumpet the economic payoff and a chance to cash in on a kind of big development project that rarely comes along.

In Winner, S.D., where the population numbers fewer than 3,000, Mayor Jess Keesis is eager to welcome construction workers from a 600-member “man camp” that would open just 10 miles from town if President Barack Obama approves the pipeline.

“Out here on the prairie, you know, we’re a tough people,” said Keesis, who’s also a member of the Prairie Band of Potawatomi Nation in Kansas. “We deal with drought and eight-foot blizzards and all kinds of stuff all the time, so anytime we can get something like this to give us a shot, it’s a good thing.”

Opponents say the risks are too great.

Two weeks ago, an alliance of Native American groups approved a statement saying emphatically that no pipeline would be allowed in South Dakota and that tribes stand ready to protect their “sacred water” and other natural resources.

That includes Native women, who opponents of the pipeline say would become easy prey for thousands of temporary construction workers housed in work camps. According to the federal government, one of every three Indian women are either raped or sexually assaulted during their lifetimes, with the majority of attacks done by non-Native men.

“If you like to drink water, if you like your children not being harmed, if you don’t want your women being harmed, then say no to the pipeline,” Grey Cloud said. “Because once it comes, it’s going to destruct everything.”

Opponents said they don’t want to have to follow through on their plans. They hope that they have the ultimate trump card with a president who just happens to be an adopted Indian. That would be Barack Black Eagle, who was formally adopted by Hartford and Mary Black Eagle of Montana’s Crow Indian Tribe in 2008, when he visited the tribal reservation during his first presidential run.

“They didn’t do that by accident – they saw something in him, and I hope he recognizes that within himself,” Spotted Eagle said.

Grey Cloud said Obama would be “going against his word” if he approves the pipeline: “His main promise was to not allow pollution in our area.”

Keesis said the project carries risks but ultimately would be a winner for the region. He said the city of Winner and surrounding Tripp County would get a windfall of roughly $900,000 a year from construction workers patronizing the town’s restaurants, bars and its recently upgraded digital theater. Even the city would make money, hauling liquid waste from the nearby construction camp to its municipal facilities.

After spending 20 years working in oilfields and boomtowns, he’s convinced that much has changed, with construction workers “under the gun to behave.”

“I’ve been in boomtowns all my life: Wyoming, Texas, California, Colorado, Alaska, everywhere,” he said. “I don’t think it’s going to be near as bad as what people have in their minds. The oilfield, as with any other occupation like this, has really mellowed over the last 20 years. It’s not the Wild West like it used to be. . . . But you’ve got to take a little bad with the good.”

Obama, who has not said when he’ll make a final decision, is under heavy pressure to approve the project. Just last week, all 45 Republican senators sent a letter to the president, saying thousands of jobs are at stake and reminding him that he had promised them to make a decision by the end of 2013.

Nationally, project backers appear to be riding the momentum, armed with a State Department report on Jan. 31 that minimized the climate change impact of building the pipeline. Republican House Speaker John Boehner of Ohio said the report shows Americans that there is “no reason, scientific or otherwise, to block this project any longer.”

While Obama has kept mum, his administration has been offering hope to tribal officials.

“If we’re developing an area that runs through Indian Country, it’s very important that we reach an agreement that makes sense to tribes,” Interior Secretary Sally Jewell told tribal officials during a visit to Oklahoma in November, according to a story published in the Native American Times. “If not, that might mean the pipeline or transmission line goes somewhere else.”

In South Dakota, the proposed line would not go through any of the state’s nine reservations, but opponents say its close proximity would still pose a hazard.

TransCanada officials say they’ve worked closely with the tribes, even halting work in northeast Texas last year as a team of archaeological contractors dug for Indian artifacts at a sacred site.

With the southern section of the pipeline already open, company spokesman Terry Cunha said TransCanada is now working with 17 tribes in South Dakota, Montana and Nebraska, where the company needs Obama’s approval to build. He said the company hopes to begin work in those states in 2015.

Cunha said the company expects the pipeline to have a “limited impact” on the environment and that its work camps will be provided with around-the-clock security.

“We see it as a positive benefit,” he said.

Besides the short-term construction work, Keesis said his city would gain another 30 to 40 permanent residents who would work on pipeline-related jobs. He said Winner needs a lift, noting that since the city shut down its strip clubs a few years back, fewer pheasant hunters are visiting, opting to stay in big hunting lodges nearby.

“When I moved here, during the first three weeks of pheasant season, you couldn’t find a parking space,” he said. “Now you can park anywhere.”

But the economic argument is a hard sell for many tribal members in South Dakota, where history is still raw. It’s the scene of the some of the bloodiest battles between Indians and the federal government, including the 1890 massacre at Wounded Knee Creek by the U.S. 7th Cavalry that killed nearly 300 Sioux.

Spotted Eagle said she feels obligated to try to stop the pipeline, both to provide toxic-free land and water for her grandchildren and to protect women from attacks.

“This is a form of militarism, bringing in these man camps,” said Spotted Eagle. “For those of us who have the history, it smacks of repetitive economics, when they put us in forts and they wanted our land. . . . All we’re willing to do here is sell our soul, just for the economy. That’s the dark side.”