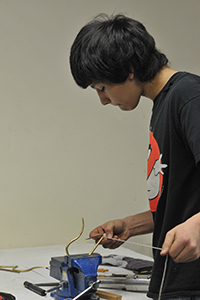 Makah tribal member Alex Wise works to wrap one of the halibut hooks during a community volunteer session where the hooks were made. He later used them in a test fishing project.

A fish hook has tied history, culture and the Makah community together in unexpected ways.

The čibu·d (pronounced “cha bood”), or halibut hook, became the subject of a student project during an internship with Makah Fisheries Management.

“I had a student, Larry Buzzell, come to me wanting to do a project that related to historical fishing methods,” said Jonathan Scordino, marine mammal biologist for the Makah Tribe.

Historically the hooks were made of both wood and bone. As the tribe gained access to new materials, they also made hooks from metal.

“The goal of the project was to test if the čibu·d was more selective for catching halibut than contemporary circle hooks when fished on a longline,” Scordino said.

Setting up the experiment was challenging because the study required 200 čibu·d to be made by hand.

“We decided to put it out to the community to see if they would come in and help us make them,” Scordino said.
The Makah Cultural and Research Center (MCRC) opened its exhibit preparation space for several weeks to allow community members to come in and help make the hooks.

“The response was terrific,” Scordino said. “Several volunteers put in more than 20 hours making čibu·d.”
Through trial and error, the group learned it was better to bend the metal hooks cold rather than heat the metal. The design of the hook more closely mimics Polynesian fishing gear than historical North American fishing gear.

Elder Jesse Ides (Hushta) watched as young people learned to make the hook he used in his youth.
“It’s terrific seeing them show the determination to make it and use it,” Ides said.
He recalled his father hauling canoes out to the halibut grounds to fish. “You’d catch just halibut with that gear, nothing else,” he said. 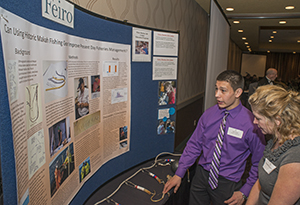 Alex Wise is finishing the project by writing up how the catch of halibut and bycatch compared between čibu·d and circle hooks during the study. “It was an interesting project. I have always been interested in fisheries and it just seemed like the right choice for me,” said Wise, who won a Art Feiro Science Student of the Year award recently from the Feiro Marine Life Center in Port Angeles for his work on the hooks.

“The čibu·d was known to not only fish selectively for halibut, but not catch too small or too big a halibut,” Scordino said. “From a management perspective, that’s exactly the size you want to catch so the older spawners remain and the young grow to be a harvestable size.”

Tribal member Polly McCarty, who helps prepare exhibits at the MCRC, was thrilled to see the community participation.

“This museum and its contents belong to the village,” McCarty said. “It was wonderful to have them come in and interact with the history.”

A parallel project is to film the creation of wooden čibu·ds. Additionally an exhibit was created in the Makah Fisheries Management building with the kelp line and hooks, and descriptions of the history. A Preserve America and a cooperative National Oceanic and Atmospheric Administration grant helped pay for the projects.