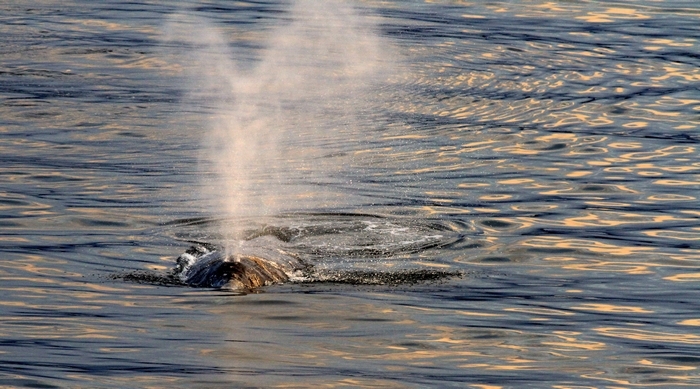 Gray whales have two blow holes atop their heads.

By Mike Benbow, The Herald

An estimated 22,000 gray whales will swim past Washington’s coastline during the next few weeks as they migrate thousands of miles to rich feeding grounds near Alaska.

A dozen or more of the giant creatures are expected to spend a few months in Puget Sound as they bulk up for the trip.

The whales don’t eat while spending the winter in their breeding grounds in Mexico’s Baja Peninsula or in the Gulf of California, so fuel stops are needed as they travel 5,000 to 6,500 miles to the Bering and Chukchi seas in the Arctic.

The Pacific Whale Watching Association calls it the longest migration of any mammal on Earth, with the whales traveling at about five knots and averaging 75 miles a day on the trip.

There have been a couple sightings of whales in the Sound already this year, so whale-watching season has officially begun.

Island Adventures Whale Watching, which offers three-hour trips from the Port of Everett, begins operations on Saturday and will continue until May 18.

California gray whales are sizable creatures, reaching an estimated 45 feet in length and weighing as much as 40 tons. They can live for decades.

Olympia-based Cascadia Research has been studying the small but growing group of grays in Puget Sound since 1990. It has identified whales that visit the Sound every year, feeding in shallow tide flats around Everett and Whidbey and Camano islands for sand shrimp. In addition to the regulars, there are also usually a few transients.

The resident whales regularly visit Mission Beach on the Tulalip Tribes Reservation, rolling in the shallows during high tide to stir up the beach and using their baleen plates to separate the shrimp from the water and sand.

They can eat about a ton of shrimp a day, according to the institute.

Michael Harris of the whale-watching association said the population of gray whales is growing, which could be good news for local whale watchers.

“We’re fortunate that we get about a dozen gray whales who hang out each spring for long periods of time feeding on ghost shrimp — what we call ‘residents’— but from the sound of things, we should be getting a lot of migratory whales in here, too. And maybe some hungry orcas following them in,” he said in a news release.

He added that researchers in California are reporting bigger than usual numbers of gray whales in this year’s migration.

First trip is Saturday. The boat leaves at 11 a.m. Trips will continue through May 18. In addition to whales, customers frequently see harbor seals, sea lions, porpoises, eagles and osprey.