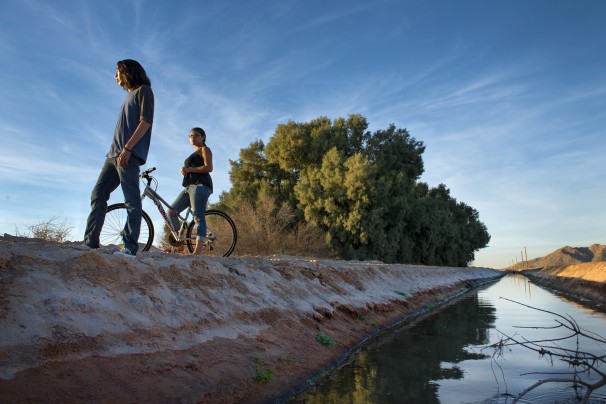 Youths’ suicides rattle Indian country: The silence that has shrouded suicide in Indian country is being pierced by growing alarm at the sheer numbers of young Native Americans taking their own lives — more than three times the national average, and up to 10 times the average on some reservations.

SACATON, ARIZ. The tamarisk tree down the dirt road from Tyler Owens’s house is the one where the teenage girl who lived across the road hanged herself. Don’t climb it, don’t touch it, admonished Owens’s grandmother when Tyler, now 18, was younger.

There are other taboo markers around the Gila River Indian reservation — eight young people committed suicide here over the course of a single year.

“We’re not really open to conversation about suicide,” Owens said. “It’s kind of like a private matter, a sensitive topic. If a suicide happens, you’re there for the family. Then after that, it’s kind of just, like, left alone.”

But the silence that has shrouded suicide in Indian country is being pierced by growing alarm at the sheer number of young Native Americans taking their own lives — more than three times the national average, and up to 10 times on some reservations.

A toxic collection of pathologies — poverty, unemployment, domestic violence, sexual assault, alcoholism and drug addiction — has seeped into the lives of young people among the nation’s 566 tribes. Reversing their crushing hopelessness, Indian experts say, is one of the biggest challenges for these communities.

“The circumstances are absolutely dire for Indian children,” said Theresa M. Pouley, the chief judge of the Tulalip Tribal Court in Washington state and a member of the Indian Law and Order Commission.

Pouley fluently recites statistics in a weary refrain: “One-quarter of Indian children live in poverty, versus 13 percent in the United States. They graduate high school at a rate 17 percent lower than the national average. Their substance-abuse rates are higher. They’re twice as likely as any other race to die before the age of 24. They have a 2.3 percent higher rate of exposure to trauma. They have two times the rate of abuse and neglect. Their experience with post-traumatic stress disorder rivals the rates of returning veterans from Afghanistan.”

In one of the broadest studies of its kind, the Justice Department recently created a national task force to examine the violence and its impact on American Indian and Alaska Native children, part of an effort to reduce the number of Native American youth in the criminal justice system. The level of suicide has startled some task force officials, who consider the epidemic another outcome of what they see as pervasive despair.

Last month, the task force held a hearing on the reservation of the Salt River Pima-Maricopa Indian Community in Scottsdale. During their visit, Associate Attorney General Tony West, the third-highest-ranking Justice Department official, and task force members drove to Sacaton, about 30 miles south of Phoenix, and met with Owens and 14 other teenagers.

“How many of you know a young person who has taken their life?” the task force’s co-chairman asked. All 15 raised their hands.

“That floored me,” West said.

A ‘trail of broken promises’

There is an image that Byron Dorgan, co-chairman of the task force and a former senator from North Dakota, can’t get out of his head. On the Spirit Lake Nation in North Dakota years ago, a 14-year-old girl named Avis Little Wind hanged herself after lying in bed in a fetal position for 90 days. Her death followed the suicides of her father and sister.

“She lay in bed for all that time, and nobody, not even her school, missed her,” said Dorgan, a Democrat who chaired the Senate Committee on Indian Affairs. “Eventually she got out of bed and killed herself. Avis Little Wind died of suicide because mental-health treatment wasn’t available on that reservation.”

Indian youth suicide cannot be looked at in a historical vacuum, Dorgan said. The agony on reservations is directly tied to a “trail of broken promises to American Indians,” he said, noting treaties dating back to the 19th century that guaranteed but largely didn’t deliver health care, education and housing.

When he retired after 30 years in Congress, Dorgan founded the Center for Native American Youth at the Aspen Institute to focus on problems facing young Indians, especially the high suicide rates.

“The children bear the brunt of the misery,” Dorgan said, adding that tribal leaders are working hard to overcome the challenges. “But there is no sense of urgency by our country to do anything about it.”

At the first hearing of the Justice Department task force, in Bismarck, N.D., in December, Sarah Kastelic, deputy director of the National Indian Child Welfare Association, used a phrase that comes up repeatedly in deliberations among experts: “historical trauma.”

Youth suicide was once virtually unheard of in Indian tribes. A system of child protection, sustained by tribal child-rearing practices and beliefs, flourished among Native Americans, and everyone in a community was responsible for the safeguarding of young people, Kastelic said.

“Child maltreatment was rarely a problem,” said Kastelic, a member of the native village of Ouzinkie in Alaska, “because of these traditional beliefs and a natural safety net.”

But these child-rearing practices were often lost as the federal government sought to assimilate native people and placed children — often against their parents’ wishes — in “boarding schools” that were designed to immerse Indian children in Euro-American culture.

In many cases, the schools, mostly located off reservations, were centers of widespread sexual, emotional and physical abuse. The transplantation of native children continued into the 1970s; there were 60,000 children in such schools in 1973 as the system was being wound down. They are the parents and grandparents of today’s teenagers.

Michelle Rivard-Parks, a University of North Dakota law professor who has spent 10 years working in Indian country as a prosecutor and tribal lawyer, said that the “aftermath of attempts to assimilate American and Alaska Natives remains ever present . . . and is visible in higher-than-average rates of suicide.”

The Justice Department task force is gathering data and will not offer its final recommendations to Attorney General Eric H. Holder Jr. on ways to mitigate violence and suicide until this fall. For now, West, Dorgan and other members are listening to tribal leaders and experts at hearings on reservations around the country.

“We know that the road to involvement in the juvenile justice system is often paved by experiences of victimization and trauma,” West said. “We have a lot of work to do. There are too many young people in Indian country who don’t see a future for themselves, who have lost all hope.”

The testimony West is hearing is sometimes bitter, and witnesses often come forward with great reluctance.

“It’s tough coming forward when you’re a victim,” said Deborah Parker, 43, the vice chair of the Tulalip Tribes in Washington state. “You have to relive what happened. . . . A reservation is like a small town, and you can face a backlash.”

Parker didn’t talk about her sexual abuse as a child until two years ago, when she publicly told of being repeatedly raped when she “was the size of a couch cushion.”

Indian child-welfare experts say that the staggering number of rapes and sexual assaults of Native American women have had devastating effects on mothers and their children.

“A majority of our girls have struggled with sexual and domestic violence — not once but repeatedly,” said Parker, who has started a program to help young female survivors and try to prevent suicide. “One of my girls, Sophia, was murdered on my reservation by her partner. Another one of our young girls took her life.”

Stories of violence and abuse

Owens recalls how she used to climb the tamarisk tree with her cousin to look for the nests of mourning doves and pigeons — until the suicide of the 16-year-old girl. The next year, the girl’s distraught father hanged himself in the same tree.

“He was devastated and he was drinking, and he hung himself too,” Owens said.

She and a good friend, Richard Stone, recently talked about their broken families and their own histories with violence. When Owens was younger, her uncle physically abused her until her mother got a restraining order. Stone, 17, was beaten by his alcoholic mother.

“My mother hit me with anything she could find,” Stone said. “A TV antenna, a belt, the wooden end of a shovel.”

Social workers finally removed him and his brothers and sister from their home, and he was placed in a group home and then a foster home.

Both Owens and Stone dream about leaving “the rez.” Owens hopes to get an internship in Washington and have a career as a politician; Stone wants to someday be a counselor or a psychiatrist.

Owens sometimes rides her bike out into the alfalfa and cotton fields near Sacaton, the tiny town named after the coarse grasses that once grew on the Sonoran Desert land belonging to the Akimel O’Odham and Pee Posh tribes. She and her friends sing a peaceful, healing song she learned from the elders about a bluebird who flies west at night, blessing the sun and bringing on the moon and stars.

One recent evening, as the sun dipped below the Sierra Estrella mountains, the two made their way to Owens’s backyard. They climbed onto her trampoline and began jumping in the moonlight, giggling like teenagers anywhere in America.

But later this month on the reservation, they will take on an adult task. Owens, Stone and a group of other teenagers here will begin a two-day course on suicide prevention. A hospital intervention trainer will engage them in role-playing and teach them how to spot the danger signs.

“In Indian country, youths need to have somebody there for them,” Owens said. “I wish I had been that somebody for the girl in the tamarisk tree.”