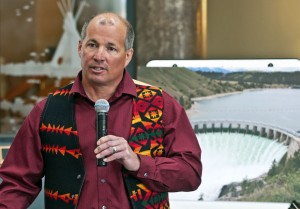 Brian Lipscomb, the CEO of Energy Keepers, announced this week that that the Confederated Salish and Kootenai Tribes would acquire Kerr Dam for $18.3 million – more than the $14.7 million the tribes wanted to pay, but more than $30 million less than what PPL Montana had sought (Photo by Tom Bauer/Missoulian).

Almost 40 years after starting the process to acquire Kerr Dam, the Confederated Salish and Kootenai Tribes have almost reached the finish line.

And they’ll get there for a price that is tens of millions of dollars closer to what the tribes said it was worth than what PPL Montana wanted for it, the Missoulian reports.

The Flathead Indian Reservation tribes will become the first in the nation to own a major hydroelectric facility when they turn over $18.3 million. That’s the price set by the American Arbitration Association after weighing arguments from CSKT, which maintained the price should be $14.7 million, and PPL Montana, which said it should be nearly $50 million.

Extensive hearings on the price were held in January.

“This is a historic day for the Confederated Salish, Pend d’Oreille and Kootenai Tribes,” CSKT Chairman Ron Trahan said. “We’ve been working toward this for 40 years. It brings tears to my eyes, because it’s something we never quit on.”

The earliest the transfer of ownership can take place is Sept. 5, 2015.

New owners will mean a new name for the dam according to Brian Lipscomb, CEO of Energy Keepers, a federally chartered corporation wholly owned by the tribes. Completed in 1938, the dam was named after Frank Kerr, president of Montana Power Company at the time.

“We’ve been titled as visionary people, and it plays out,” council member Lloyd Irvine said at a press conference announcing the price. Acquisition of the dam “is one of the tools that ensures the future of our people.”

“We should not be blinded by the bling,” Pitts said. “There will be a lot of issues that come with this. We need to be fully prepared.”