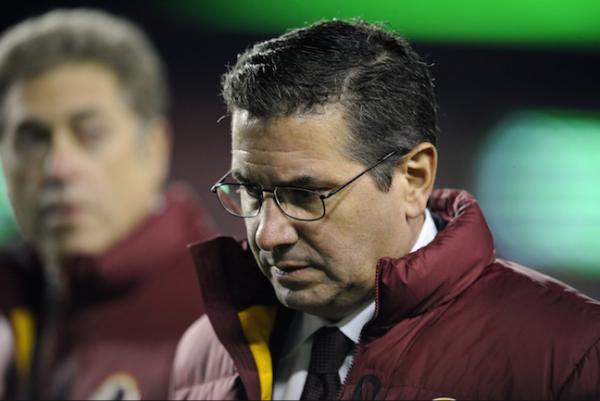 Dan Snyder, owner of the Washington Redskins, has been trying to sway public opinion to support his football team’s racist name for years now. He’s dangled money in front of needy schools in and around Pine Ridge. He tried—unsuccessfully—to get Haudenosaunee leaders to say disparaging things about Oneida Nation Representative Ray Halbritter, who launched the Nation’s campaign to change the offensive name. He got Jennifer Farley, former high level White House employee during the George W. Bush administration, who was on the receiving end of gifts from disgraced former Republican lobbyist Jack Abramoff, to facilitate a meeting with the Poarch Band of Creek Indians and other Indian leaders—who have been asked to sign non-disclosure agreements about what’s been said and done at the meetings. He’s waved tempting 50-yard-line D.C. game tickets and Super Bowl tickets under the noses of lobbyists and leaders, and presented a poorly orchestrated series of online endorsements by fans who are supposedly Native (mostly claiming Cherokee heritage) in an effort to prove the team’s ugly name is not offensive to Indians.

And now, in a sad turn of events, he’s managed to snare the endorsement of seven World War II veterans. After months of courting support in Indian country, Snyder finally chalked up a big success: Seven octogenarian Navajo Code Talkers have endorsed the Redskins name and mascot. But judging from the reaction in Indian country, it could be his greatest misstep yet in this sordid campaign.

The endorsement was approved at a meeting of the Navajo Code Talkers Association (NCTA) in Window Rock, Arizona on February 28 – and was met with outrage from the descendants of code talkers actively involved in the association and devoted to honoring the legacy of their fathers and grandfathers. Much of their ire is directed at Association Chairman Peter MacDonald, who they allege has “hijacked” the NCTA and manipulated the code talkers to endorse the name for his own benefit.

In an interview with Indian Country Today Media Network, MacDonald vigorously denied having any financial involvement with the Redskins team. “There’s been all kinds of rumors and innuendos and theories going around about what our relationship with the Washington Redskins is all about. We wanted to set the record straight. There have been calls that Redskins paid us money… this is all totally wrong. Let me say this: The Redskins’ invitation and visit by Navajo Code Talkers was totally, totally funded by Redskins… to honor the Navajo Code Talkers. It was completely initiated by the Redskins as part of their annual tribute to all armed forces.

“The Navajo Code Talkers weren’t paid one cent to be there, nor were there any promises made about donations… ”

Reports of the NCTA endorsement showed up on Facebook late in the afternoon of February 28, and the news spread quickly. Here are a few typical posts. (Both the Facebook link and people’s names have not been used in order to protect their privacy.)

“People are crying. I almost threw up when I read it.”

“Rather give more attention to the medicine man association… code talkers have become nationalist puppets and fall for anything.”

Several Navajo descendants and other Navajo citizens expressed suspicion about MacDonald and his motives. Their common theme was, “He divided the Nation.” A former Navajo Nation president, MacDonald was removed from office by the Navajo Tribal Council in 1989 under suspicion of accepting kickbacks from contractors and corporations. The chaos that followed led, a few months later, to a riot in Window Rock in which two MacDonald supporters were shot to death and tribal police officers were injured. “It was an event that would forever change life for many people on the Navajo Nation,” the Navajo Times reported.

MacDonald was tried and sent to federal prison in 1992 for 107 violations of U.S. law, including charges of fraud, extortion, riot, bribery, and corruption. He served eight years of a 14-year sentence and was released in January 2001, when his sentence was commuted by then-President Bill Clinton on his last day in office.

MacDonald was voted president of the NCTA in January 2012.

In November, Navajo Nation Councilman Joshua Lavar Butler condemned what he called team officials’ “antics to use our beloved and cherished Navajo Heroes as pawns in their Public Relations battle to perpetuate this indignity and ignorance.”

“I know this really hurts our inter-tribal relationships around the country,” Butler added. ”As a council member, I’ve been very involved statewide and on the national level with advocacy efforts with other tribal leaders and something like this, it does affect unity and our working relationships inter-tribally.”

The Navajo Nation is not a member of the National Congress of American Indians, which recently published a white paper called “Ending the Legacy of Racism in Sports & the Era of Harmful ‘Indian’ Mascots,” but it does partner with NCAI on issues of common concern.

“The NCTA is putting us in an awkward position because some tribes, especially on the east coast, are fighting this aggressively. At the end of the day, we have to work with those tribes as well and the NCTA is sending the wrong message by endorsing the utilization of that term,” Butler said. “It’s very upsetting, it’s shameful, it’s wrong, it’s derogatory and the Redskins should be ashamed of themselves.”

MacDonald and members of the NCTA met Snyder last fall after he began his tour of Indian country, seeking support for his team name and mascot. A friend of Snyder’s told the Washington Post that the trips to Indian country were motivated by Snyder’s “feelings about the pain and depression – depression is the word he has used with me – of Native Americans who have no jobs, who have obesity issues, whose children are suffering.”

The trips also coincide with launching of a national campaign against the team name supported by the Oneida Indian Nation (which owns ICTMN) called “Change the Mascot.”

In recent months, Snyder and his team officials have visited the Poarch Band of Creek Indians, a tribe under fire from other tribes for building a casino on Hickory Ground, a site that’s sacred to the Muscogee Creek Indians, and the poverty-stricken Zuni Pueblo in New Mexico, among other tribes. Redskins spokesman Tony Wyllie told the Washington Post that Snyder and company have taken more than a dozen unpublicized trips around Indian country.

RELATED: The Battle For Hickory Ground

While those trips were unpublicized, Snyder’s pursuit of the Navajo Code Talkers was no secret. In late November, the Redskins plane flew MacDonald, and members George James Sr. and George Willie Sr. from Gallup, New Mexico to D.C. for the November 25 Washington-San Francisco game to “honor” them, accompanied by a blitz of media attention.

Suzan Harjo wrote of the event: “The Redskins’ ‘honoring’ of Navajo code talkers consisted of four frail veterans standing in the end zone and receiving a round of applause. Three of the four Navajo elders wore Redskins jackets, with the new-clothes price tags still hanging at their wrists. These seniors probably thought this was another in a long line of recent recognitions of their WWII achievements some 70 years ago, rather than any implied endorsement of the team’s name.”

On hearing about the Code Talkers endorsement of the Redskins, Harjo honed in on MacDonald’s involvement. “He has a long history of exploiting his people,” she said, “and I think this is an example of that.”

MacDonald has a simple explanation for the endorsement: he doesn’t think there’s anything wrong with the name, and he claims other Navajo feel the same way. “So far as we’re concerned, so far as people are concerned here at Navajo, redskins have always meant Native Americans or Indians to us – nothing more. So I don’t know who decided to make that a slur word or offensive. To us, redskins, whiteskins, blackskins, yellowskins, brownskins – we here on earth did not create the color of human skins; it was the Great Spirit that created us with different colors and we honor His creation and have no problem with anyone using those colors to identify the Lord’s creation.”

Asked if he’d mind if his grandchildren were called redskins, he said, “No! As a matter of fact we have schools right here on Navajo Nation – Red Mesa school – it’s a Navajo high school. The school [nickname] name is Redskins.”

He said he was not familiar with the origins of the name, or the 1755 Phips Proclamation in Maine that detailed the bounty prices the colonial government paid for Indian scalps, “but humans around the world have different colored skin – what’s wrong with calling them by the color of their skin?” he said.
The suggestion that most Native Americans and others see the name as a hateful racist word set MacDonald on an anti-media diatribe. “You press people! I don’t know what’s wrong with you! We have so many issues with Native American people – states, the federal government stealing our water, taking our land. There’s poverty and high unemployment on Indian reservations. Why don’t you go over there and report those things? Is the change of [the] name going to change poverty on Navajo? Will that create thousands of jobs?

“There’s the cancer rate, as well as diabetes, alcoholism, the suicide rate – all much higher than outside society. It’s a third-world nation in the back door of the United States. Report that! Forget about this name change business. We can talk about that after we put the Indian back on equal footing with the rest of the world.”

MacDonald brushed aside the fact that studies show the offensive name is emotionally and psychologically harmful to Indian children. “The children here at Navajo at Red Mesa don’t want to change their name, they want to remain redskins,” he said.

The NCTA endorsement of the Redskins name passed by a vote of 7-0-0, meaning only seven code talkers attended the meeting. MacDonald said there are currently around 40 code talker members and all of them were notified of the meeting, but several descendants said their fathers and grandfathers were not notified.

Ron Kinsel, son of Code Talker John Kinsel, added that his dad did not approve of the endorsement of the Redskins name or the way the vote was conducted. “It was done without the association’s awareness. They were trying to pass it without a quorum,” Kinsel said.

MacDonald told ICTMN that the association’s bylaws define a quorum as 10 percent of the total member and therefore the seven-member vote was legitimate. However, Section 13 of the NCTA bylaws says, “The greater of ten (10) voting members or ten (10) percent of the voting members” constitutes a quorum, meaning that 10 members were required for the vote. The bylaws also mandate that “Notice of any meeting shall be given by oral or written notice delivered to each member. . . not less than ten (10) days nor more than fifty (50) days before the date of the meeting.”

The NCTA endorsement has mobilized the code talkers’ descendants into action. A meeting for concerned descendants of Navajo Code Talkers has been scheduled for Saturday, March 15, 2014 at 9:00 a.m. at Cafe Iina at the Navajo Nation Museum. Duvonne Manuelito, whose late grandfather James Manuelito was one of the original 29 code talkers, said it’s an opportunity for all the code talkers’ descendants to come together and plan a strategy to protect their fathers’ and grandfather’s legacy. “We need to let people know there’s another side to what’s going on.”