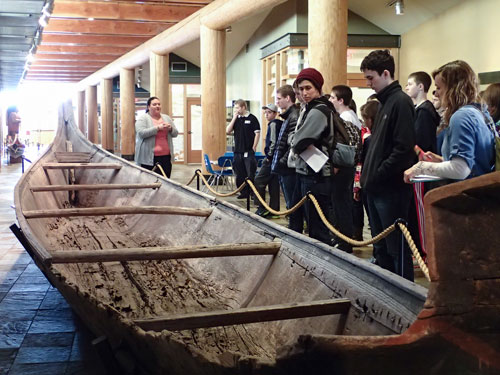 Seattle University Prep students learn about the wedding dowry canoe during a school tour on March 11. The canoe was donated to the Hibulb Cultural Center by Tulalip member Wayne Williams, and was carved around the 1880s.
Photo/ Brandi N. Montreuil, Tulalip News

“We call ourselves a cultural center not a museum, because we are still an intact and living culture. What you see here is how our lifeway’s were then and are today,” greeted Mary Jane Topash, Hibulb Cultural Center’s Tour Specialist to Seattle University Prep students on Tuesday, March 11, at the beginning of their tour.

The 23,000 square feet center with 50-acre natural history preserve will be celebrating it’s third year this August. Since its opening, it has become an important representative of Tulalip culture to hundreds of visitors through the use of tours. 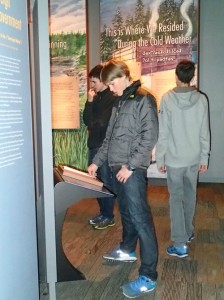 While most who visit the center have little or no prior knowledge of Tulalip, or Native American heritage, Topash says every school tour is treated as an opportunity to change perceptions and educate youth, who may one day work with tribal 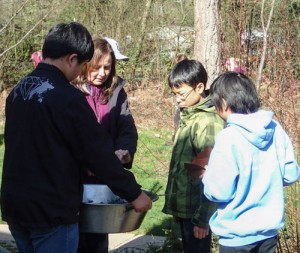 As part of the special tour students were able to learn about traditional plants and how they were used.
Photo/ Brandi N. Montreuil, Tulalip News

Staff at the center is faced with an uphill battle. How do you engage youth to learn who you are as a cultural community when they have no idea you still exist?

“Our biggest problem is people think we are a static culture, that we have died off. Often times, I am the first Native American the students have met,” says Topash, who starts her tours with a video in the center’s longhouse to give visitors a foundation of who Tulalip people are and what they believe.

“I always like to make a point to show them our traditional headdress that we [Tulalip people] wear. It helps to quickly squash the Native American stereotype. A lot of patrons come in and say ‘I didn’t know you have canoes,’ or ‘I didn’t know you didn’t live in teepees.’ That is why I also explain in my tours why we are a cultural center. We are not done, we are still living,” said Topash.

During the hour-long tour, the nearly 30 students quietly trailed along, peering at hundreds of items that are distinctive to Tulalip culture. A few students lagged behind showing little interest in the beautifully handcrafted cedar woven baskets or interactive exhibits, but majority of the group listened. As Topash began to talk about why Tulalip is a federally recognized tribe and has sovereign rights, it became clear how much educating still needs to be done in public schools about the history of Native Americans.

“It isn’t what they typically learn,” said Topash about the lack of response from the students in the Treaty of Point Elliot portion of the tour. “They are not exposed to that. It is mainly based on what they have learned in textbooks, so to come 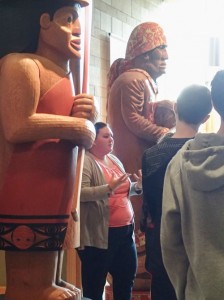 in and see it for themselves is different. The biggest reaction we get is from teachers on how their students reacted to what they have learned in the classroom after coming here.”

A diversity of visitors in age and race populate the weekly tours with each one having a different level of Native American exposure. This spring Marysville School District, through the Indian Education Department, has signed up to have all district third graders visit the center.

“There are three portions that I make a point to reinforce in each tour, which is the treaty portion, the boarding school, and when I explain the inside of the basket structure, because that is how we have sustained ourselves through the three topics highlighted in that structure,” said Topash. “It is always a different reaction depending on the age group. I like educating people about Tulalip, it is a personal thing as a tribal member to teach about what we have done, and what we are still doing. It can be taxing, but it is rewarding because you get those light bulb moments where people understand who we are, that is my favorite part of the tours.”