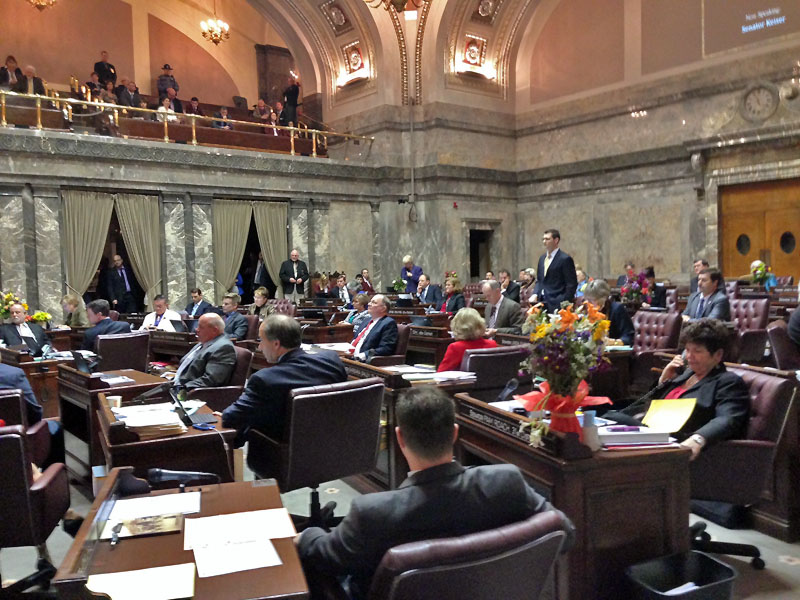 In the final hours, lawmakers passed a bipartisan update to the state’s two-year budget. They also sent the governor a bill to give military veterans in-state tuition to attend college. And reauthorized a fee that pays for homeless housing.

But it’s what lawmakers did not do this legislative session that may stand out most for voters.

One major item lawmakers could not agree on — a gas tax increase to fund road projects and transit. It’s something Governor Jay Inslee has pushed for since taking office.

As the legislative session wound down, the blame game was just winding up.

Not so, responded Democrat Judy Clibborn, chairs of the House Transportation Committee. She blamed the Senate majority for not producing a gas tax package that could pass out of its own chamber.

“I am frustrated as anybody,” said Clibborn. “We worked very hard to get this done. It’s been a year-and-a-half to two years for me.”

Item number two on the did-not-pass list: a requirement that school districts use a federally-approved student test for any teacher evaluation. Why does this matter? U.S. Secretary of Education Arne Duncan has told Governor Inslee without this requirement Washington could lose its federal No Child Left Behind waiver. And with it control of $40 million in federal funds to help struggling students.

“So be it,” he said. “If Arne Duncan wants to withhold 20 percent of funds from our poorest schools then I guess that’s his prerogative.”

Out in the Capitol Rotunda, State Schools Superintendent Randy Dorn was incensed at the bill’s demise.

“Adults not doing what’s right for kids,” he said.

Dorn blames the state’s teachers union for killing the bill.

“We’re not showing a good faith effort to get it under control so the feds have nothing to judge us by.”

But Democrat Roger Goodman in the Washington House believes it was premature to change the medical marijuana system and it would have hurt patients. He wants to wait a year and isn’t worried about the feds sweeping in.

“They’re watching closely, we’re listening carefully,” says Goodman. “I think the chances of federal intervention are limited particularly as we show to them and continue to communicate with them that we’re working on it in advance of the next legislative session.”

So what else died in the Washington legislature this year? Dueling proposals on the minimum wage. A tax on e-cigarettes. And a ban on gay conversion therapy.

But the past 60-days in Olympia also featured some surprising bipartisan breakthroughs. A big one: undocumented students won access to state financial aid to attend college. But there’s no guarantee they’ll get that money because the program is already underfunded.

Much of this session was about the fall elections ahead. Control of the Washington Senate looks like it’s up for grabs for the first time in a decade.