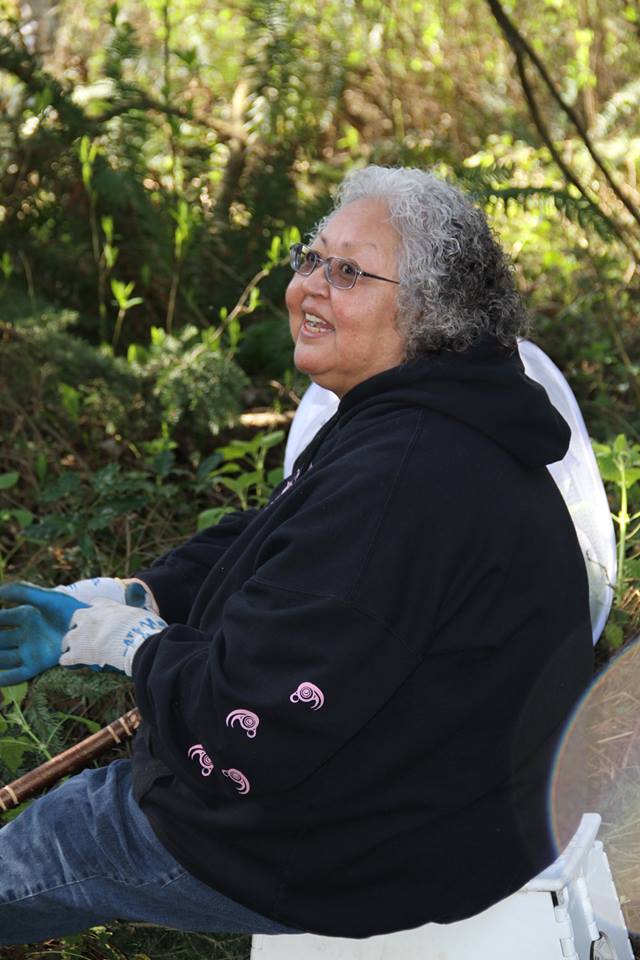 The nuisance in the back yard known for its annoying sting and pungent earthy smell, nettle is not the most desirable flora of the Pacific Northwest. For northwest tribes, however, nettle is a cultural and traditional staple. The Rediscovery Program at the Hibulb Cultural Center began their spring harvest of nettle sprouts March 12th, working to reintroduce the use of nettle into the community and continuing the revitalization of our culture.

Inez Bill, who has spent the last ten years learning about how to use nettle, harvested nettle sprouts on the bluff above Arcadia on the Tulalip Reservation. Derek Houle, who has been involved with the culture program for most of his life, and Lauw-Ya Spencer, who became involved in 2012 through the summer youth program, joined Bill as they gathered the sprouts to use in the rediscovery program. They then process the nettle sprouts for use in foods and preserve some nettle for continued use throughout the year.

“Nettle was a staple for our people for hundreds of years,” explained Bill, “It has tremendous health benefits. For food you have to harvest the sprouts in the spring, or in the summer you can harvest the tops of the nettle, the stock gets too hard. Here at the museum we have expanded the uses. We make nettle tea and different flavored lemonades with nettle tea. We also have created Hibulb Bread, which is like buckskin bread, only more healthy and nutritional.”

Bill and her husband, the late Hank Gobin, learned to harvest and prepare nettle and other traditional flora from Valerie Segrest, Elise Krohn, and the late Bruce Miller, whose dedicated themselves to cultural revitalization and educating about traditional flora. Bringing that knowledge to the rediscovery program, Bill continues their work in revitalizing traditional plant use. As a girl, Bill’s elders instilled in her the respect and reverence for these traditional plants as foods and as medicines and she hands down those teachings throughout the rediscovery program. She also gets creative, incorporating nettle into many recipes.

“The Hibulb bread is diabetic friendly. It is made with ground almond meal instead of flour, and without salt or sugar. Ground nettle is added, but we had to play around with how much was the right amount.” said Bill.

A true superfood, nettle is packed with nutrients. It can be ground up and added to almost any dish for a healthy boost. The cultural center makes a seasoning, ground nettle for recipe ingredients, blanched and frozen nettle for later in the year, nettle stock, nesto (nettle pesto), and so much more. As a cultural staple, beyond food, nettle was traditionally made into twine and nets, it is one of the stronger natural twines.

To learn more about the rediscovery program, or to participate in activities, contact Inez Bill at the Hibulb Cultural Center at (360) 716-2638.