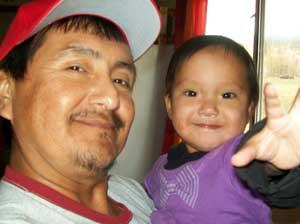 PHOENIX—I am Isadore Boni and a member of the San Carlos Apache Tribe in Arizona. Living with HIV has not been easy. A lot of people think you can just take pills, but it’s far greater than that.

I’ve gone through the trenches living on the streets of Phoenix for two years, digging ditches working day-labor at minimum wage. Because of the stigma, I chose to disappear for a while and very rarely communicated with my family.  I’ve also dealt with hate-crimes while homeless.

I knew this was not what I planned for my life. I am a college graduate from Arizona State University. This was not supposed to happen. Several years later after obtaining housing for people with AIDS my life changed. Going public took me to places I never imagined. I became affiliated with the National Native American AIDS Prevention Center sitting on their Community Advisory Council. It was in 2007 that they began the National Native American AIDS Awareness Day.

With the CDC reporting that Native people have the shortest life-span after infection, I decided to do more than expected. I never had a “job” at an AIDS agency. I did all my fundraising through car-washes at the store I worked as a janitor.  More than 80 ASU students would volunteer their time to raise funds. This is how I managed to reach Indian country. My tribal council would not embrace me when I was diagnosed; I expected this, I thought it was because of my sexual orientation as well. I began thinking “if I were straight I’d be embraced by everyone.”

National Native American HIV/AIDS Awareness Day is held on March 20, and every year I do all I can to share my story, even if it’s to homeless people on the streets. This day is about learning the facts of HIV/AIDS, but also to remember those who are living with HIV/AIDS and those who died of complications.

This is not a city problem; it’s a reservation problem too.  If our reservations provided education, testing, and linkage to care, perhaps we wouldn’t have the shortest life-span.

Today, after all the years of educating my people, my tribal council has completely embraced me, even passing a confidentiality law. I still do not have a “job” in this field, but I know people like me are needed  I am honored to speak for those who are voiceless, advocate for patient rights, and continue to live my life with the knowledge that my Higher Power guides me. Thy Will, not Mine, be Done.

his article was originally published by Wellbound Storytellers. Read more blogs about healthy living written by Natives throughout Indian country at WellboundStorytellers.com.