By Michael B. Marois

SACRAMENTO, Calif. — California began hauling 30 million young chinook salmon hundreds of miles toward the Pacific Ocean in tanker trucks to save the fishing industry after a record drought left rivers too low for migration.

Three climate-controlled trucks, each bearing 130,000 silvery three-inch smolts, left a federal hatchery 180 miles north of San Francisco on Tuesday for a sloshy, three-hour drive to San Pablo Bay, where they are held in netted pens to acclimate before release. Officials had said they might need as many as four vehicles. 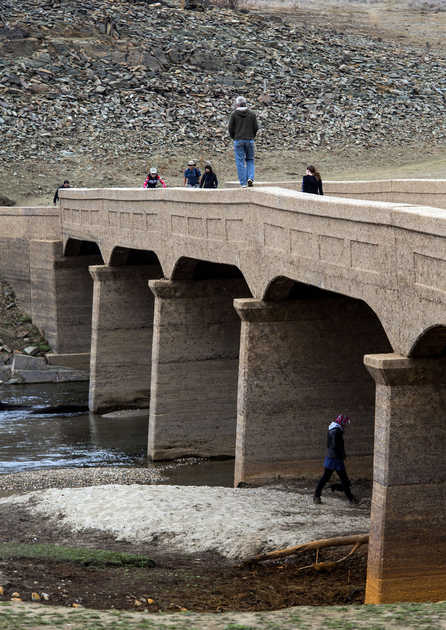 “Water conditions, because of the drought, are going to be horrible for the fish,” said Harry Morse of the state Fish and Wildlife Department. “Depending on how far those fish have to go, the longer they must travel through the system, the higher the losses.”

The fish taxi is the latest in a series of emergency steps that state and federal authorities are rushing into place as reservoirs ebb one-third below normal and farmers idle thousands of acres. Gov. Jerry Brown has called for a voluntary 20 percent cut in water use and many areas have declared mandatory restrictions. More than 800 wildfires have broken out since Jan. 1, three times more than usual, according to state records, and smog in Los Angeles is worse without winter rains to clear the air.

California’s 38 million people endured the driest year on record last year. The most-populous state has only about a quarter of the average amount of water in mountain snow that melts in the spring to fill lakes and rivers.

The hatchery fish that typically migrate through the Sacramento River Delta to the sea are key to the state’s $1.5 billion commercial and recreational fishing industry, according to the Nature Conservancy. Fish released now will be part of the population that can be harvested in a few years.

The Pacific Fishery Management Council, which helps set fishing seasons, predicted earlier this month that more than 630,000 fall-run Chinook salmon from the delta are in the Pacific Ocean now. That’s less than last year but more than enough for a normal commercial fishing season, the council said.

The lack of rainfall means that the Sacramento River will prove too shallow and too warm for the tiny fish to survive the 200 to 300 miles of river and tributaries some must navigate to reach the Pacific.

Convoys of four to seven trucks daily will make the trip from the federal hatchery for 22 days during the next two and a half months. In all, 12 million juvenile fish will be taxied from there, along with 18 million raised in four state-owned hatcheries in June. When released from the pens, the tiny fish will migrate to the ocean and mature. They return to the rivers as an adult to spawn.

“Our 2016 fishing season may be riding on the survival of the fish in these trucks,” said Roger Thomas, chairman of the Golden Gate Salmon Association, an advocacy group based in Petaluma. “We know that fish trucked around dangers lurking in the rivers and delta survive at much higher rates than those released at the hatcheries.”

While the state usually trucks some of its hatchery fish to the ocean, this year’s haul will be about three times the usual. It costs California taxpayers $1,500 a week to rent the tanker trucks, and the state expects to spend $150,000 on trucking, including fuel costs, Morse said.

The U.S. Interior Department’s Bureau of Reclamation said last month that it won’t be able to deliver any of the more than 2.4 million acre-feet of water requested by farmers in California’s Central Valley, the state’s most productive agricultural region. An acre-foot is the volume needed to cover an acre of land one foot deep with water.

The Bureau of Reclamation supplies water to 1 million people and a third of the irrigated farmland in California through a 500-mile network of canals and tunnels.

About two-thirds of Californians get at least part of their water from northern mountain rains and snow through a network of state-managed reservoirs and aqueducts known as the State Water Project, which also has said it won’t be able to deliver any of the water requested.

The California Farm Water Coalition said March 17 that farmers probably will fallow as much as 800,000 acres of land because of the lack of water at a cost of $7.5 billion.