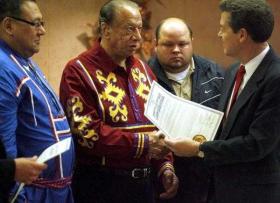 2011 FILE PHOTO/THE CAPITAL-JOURNAL
In this 2011 photo, Steve Cadue, center, accepts a proclamation from Gov. Sam Brownback at the Kansas Museum of History. In a letter to Brownback this week, Cadue expressed concern that the Legislature might cut transportation aid to school districts.

The head of the Kickapoo Tribe in Kansas expressed concern in a letter to Gov. Sam Brownback this week that the Legislature could cut transportation aid to school districts to help foot the bill for court-ordered equalization funding.

“As indicated in your own Governor’s Proclamations, the legacy of illegal and unscrupulous land cession treaties has left many tribes such as the Kickapoo located in rural areas on remote plots of land,” Cadue wrote. “Native American children will be disproportionately impacted by funding cuts to school bus services.”

In addition to addressing the court order to remedy the estimated $129 million shortfall, the bill proposed cutting an estimated $14.8 million in transportation aid for schools.

Cadue invited the governor to meet one-on-one to discuss the potential effects of such cuts.

“The current state of education for Native Americans is such that it cannot withstand funding cuts and service disruptions without increasing the educational achievement gap,” Cadue said. “I urge you to ensure that our Native American children have the same educational opportunities as the most fortunate children in Kansas.”

The Capital-Journal has contacted the Governor’s Office seeking comment.

A House budget panel has been holding hearings on the K-12 funding bill this week. The bill has drawn criticism from all sides. School districts are concerned lawmakers aren’t making a good faith effort to satisfy the court order, and are instead trimming funding from elsewhere in public education, such as aid for busing and for virtual schools. At the same time, some conservative Republican lawmakers and education-reform advocates would like to include school-choice options in the bill, such as expanding charter schools or allowing corporate tax breaks for private school tuition scholarships.

The governor released a statement earlier this month calling on the Legislature to fully fund the court’s equalization order and acknowledging “the solution to the equity problem will require significant new funding.”