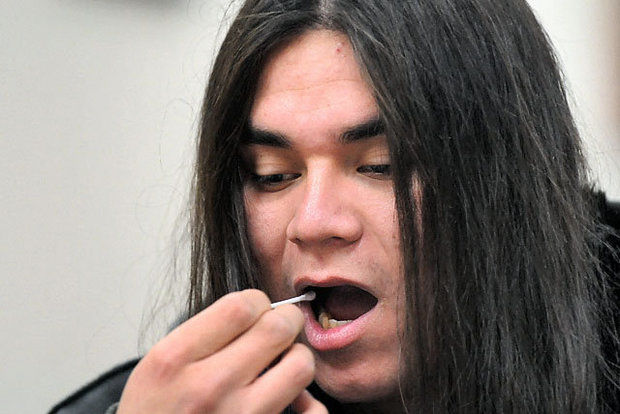 Christopher Murillo, 20, of Eastwood swabs the inside of his mouth during the bone marrow drive held at the Onondaga Nation in this 2010 file photo. The sample given by Murillo, an Onondaga, was tested to see if he was a match to be a donor for Cazenovia teen who is one-quarter Native American. Native Americans make up about one percent of the 10 million donors on the blood marrow registry. Photo: John Berry / The Post-Standard, 2010

Nedrow, NY — A bone marrow drive will be held Saturday in Nedrow in an effort to find a match for a 14-year-old Northern New York girl who is fighting for her life as she waits for a bone marrow transplant.

Alyson Stiles is battling acute lymphocytic leukemia and finding a bone marrow match has been difficult because Stiles is part Native American. 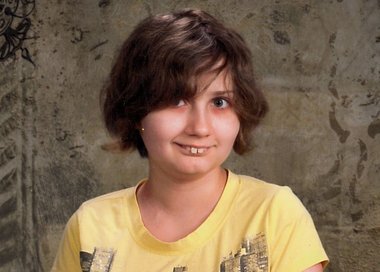 Alyson Stiles, from Northern New York, was diagnosed with acute lymphocytic leukemia when she was a toddler. Stiles, 14, is staying at the Ronald McDonald House in Syracuse and receiving treatment at Upstate Golisano Children’s Hospital. She is in need of a bone marrow transplant. Provided Photo

In 2010, a bone marrow drive was held on the Onondaga Nation to find a match for a Cazenovia teen who is part Native American. More than 50 Native Americansjoined the registry during the drive. Miller said those potential donors will remain on the registry until they are 61 years old, but more donors are needed.

The bone marrow drive will be held from 9 a.m. to 1 p.m. at the Nedrow Fire Department, which is located at 6505 S. Salina St., in Nedrow. The bone marrow drive is in honor of Stiles, but potential donors of all racial backgrounds are needed to join the registry, Miller said. Thousands of patients on the Be the Match Registry are searching for a match.

Potential donors must also be willing to donate to any patient in need, not just Stiles, Miller said.

Stiles and her family are staying at the Ronald McDonald House in Syracuse as she receives treatment at Upstate Golisano Children’s Hospital. Stiles was diagnosed with leukemia when she was a toddler. The cancer returned when Stiles was 11 and again recently. Stiles has been sick most of her life.

To be a donor, volunteers must be between 18 and 44 years old and have no history of heart disease, cancer, diabetes or HIV. The collection kit is performed by swabbing the inside of the cheek.

“It’s not painful,” Miller said. “We don’t draw blood. It’s just a quick swab to the inside of your cheek.”

To learn more about the donation process, visit the Be The Match website. For more information about the bone marrow drive in Nedrow, call Paula Miller at 476-3000, ext. 2576.

The bone marrow drive is sponsored by the William G. Pomeroy Foundation and in collaboration with the Nedrow Fire Department, Onondaga Nation Fire Department and Ronald McDonald House Charities of Central New York.