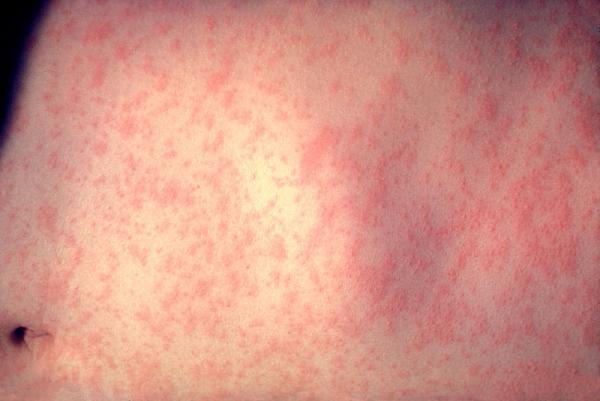 File photo of the skin of a patient after three days of measles infection.
Heinz F. Eichenwald, MD CDC

A big measles outbreak in British Columbia has crossed over the border into the American Northwest.

Health officers in B.C.’s Fraser Valley have confirmed over 350 cases of measles there since an outbreak started in early March. Six additional cases have now been diagnosed in Whatcom County, Wash., including a woman in her 20s who has prompted a regionwide alert.

While contagious, she mingled with crowds at a rock concert at Seattle’s Key Arena. She also visited Puget Sound tourist attractions such as the Pike Place Market, LeMay Car Museum and Harmon Brewing Company in Tacoma.

“To the extent that people avoid vaccines, they increase both their risk and the risk of the community so that it can take hold. I’m worried about that.”

Measles is easily prevented with a vaccine. The symptoms resemble a really bad cold followed by a rash. It can result in serious complications.

Already this year, seven cases of measles have been reported to the Washington State Department of Health. That compares to just five over the entire course of last year.

In recent years, the Washington and Oregon legislatures have made it harder to get vaccination exemptions for school-age children.