WASHINGTON – The National Congress of American Indians marked the one-year anniversary of a great victory for tribal nations and Native women on March 7. 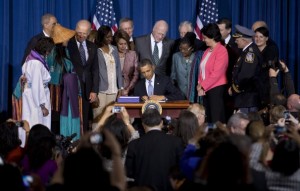 It was on that day in 2013 when President Obama signed the Violence Against Women Reauthorization Act. At the signing ceremony, the president underscored the “inherent right (of tribal governments) to protect their people.”

For the first time since the 1978 Oliphant decision, VAWA 2013 restored tribal authority to investigate, prosecute, convict and sentence non-Indians who assault their Indian spouses or partners in Indian Country. The law created a pilot project that enabled three tribes to recently begin exercising this authority.

“Today is a day to celebrate what we have achieved together and commit ourselves to ensure the ongoing success of this important law. It acknowledges that tribal nations are the best equipped to ensure public safety in our communities and provides the tools we need to protect Native women,” NCAI President Brian Cladoosby said.

The Pascua Yaqui Tribe of Arizona, the Tulalip Tribes of Washington and the Umatilla Tribes of Oregon–began exercising special criminal jurisdiction over certain crimes of domestic and dating violence, regardless of the defendant’s Indian or non-Indian status in February.

“VAWA 2013 is a tremendous victory. I am grateful to those who have stepped up to take the lead in the implementation phase,” Terri Henry, Tribal Councilor of the Eastern Band of Cherokee Indians and co-chair of the NCAI Task Force on Violence Against Women, said. “I want to congratulate the three tribes participating in the pilot project and remind everyone, we still have work to do.”

However, VAWA does not mark the end of the NCAI’s efforts to combat domestic violence in Indian Country, NCAI Executive Director Jackie Pata said. “Tribal nations remain steadfast in the important work of protecting our Native women and securing our communities,” she said.