‘Whatever the nature and degree of his participation at Oglala, the ruthless persecution of Leonard Peltier had less to do with his own actions than with underlying issues of history, racism, and economics, in particular Indian sovereignty claims and growing opposition to massive energy development on treaty lands and dwindling reservations.’

Matthiessen is best known for his fiction work, his writings on the natural world and his writing and activism on environmental causes. 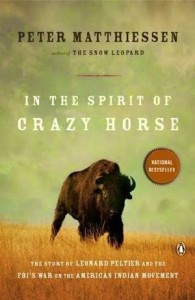 However, it is his non-fiction books that I value the most. These include  In the Spirit of Crazy Horse, which chronicles the story of Native Indian political activist Leonard Peltier and the FBI and US Government’s war on the American Indian Movement and his book about the legendary farm worker, union organizer and activist  Ceser Chavez.

In the Spirit of Crazy Horse is one of the finest examples of a book that exposed historical and political injustice and gave force to a political campaign that continues to this day.

In  In the Spirit of Crazy Horse, Matthiessen documents the massive number of crimes committed against Native American people and the genocidal nature of the US authorities in their destruction of Native cultures and people. He documents a long string of historical injustices, ranging from mass slaughter to the takeover and reapportionment of sacred or Native lands, including  the forced appropriation of Indian lands for mining  use.

The key figure in Matthiessen’s book is Leonard Peltier, who has spent 37 years in American prisons for the alleged murder of 2 FBI agents on the the Pine Ridge Indian Reserve in South Dakota in 1975.

Peltier, an Ojibwa-Lakota from Turtle Mountain, North Dakota, was one of the three young Indians  involved in a shoot-out with the FBI at Oglala on South Dakota’s Pine Ridge Reservation in June 1975, which resulted in the death of 3 men, including 2 FBI agents and an Indian. Pelteir and 3 others were later charged with the murder of the two FBI agents.

Peltier and two of the young Indian men indicted were members of the American Indian Movement (AIM) a group fiercely opposed to the sale of Reservation land and mining rights to non-Indian interests.

Mathiessen shows how the fire fight was the result of a planned military assault on the Reservation by FBI agents and local Police, working in conjunction with an Indian para-military group (The GOONS), who were linked to Indian tribal figures keen to sell Indian land to white corporate interests wanting to exploit its mineral wealth.

Those same Indian leaders, with the support of Federal authorities, had armed the GOONS (Guardians of the Oglala Nation), who had been terrorizing Indians on the reservation who opposed the sell off. In the 2 years leading up to the shoot out, the GOONS reign of terror had resulted in between 200-300 deaths.

Matthiessen’s book documents how Peltier’s conviction and subsequent life imprisonment were based on Government fraud and misconduct  and highly disputed evidence.

Matthiessen’s book was so controversial its publication was delayed for decades due to legal challenges by the US authorities and the FBI, which cost Matthiessen and his publisher $2 million in legal fees.

In 1969 Matthiessen also wrote a book length profile of Ceser Chavez the legendary union organizer for farm workers in the US. The book was titled Escape if You Can: Cesar Chavez and the New American Revolution.

Matthiesson continued to write about Chavez, quoting him in this  profile article:

When we are really honest with ourselves, we must admit that our lives are all that really belongs to us. So it is how we use our lives that determines what kind of men we are. It is my deepest belief that only by giving our lives do we find life. I am convinced that the truest act of courage, the strongest act of manliness, is to sacrifice ourselves for others in a totally non-violent struggle for justice. To be a man is to suffer for others. God help us be men.”