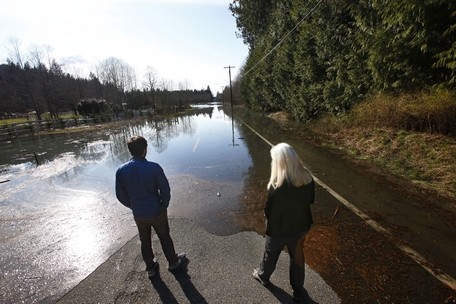 Genna Martin / The Herald
Patricia Flajole (right) and son Pat look out over a flooded Highway 530 east of the Oso mudslide area on March 23, the day after the slide. The Flajole family owns a cabin just east of the slide area. The water, which had backed up because of river blockage, has mostly receded since then.

Nearly three weeks after the devastating landslide in Oso, discussion of the fate of Highway 530 is beginning in earnest.

A series of community meetings has been scheduled for next week to gather input and discuss options for the daunting task of rebuilding the 1-mile stretch of highway that was smothered by the March 22 mudslide.

The section has been closed to the public since then, severing Darrington’s direct lifeline to Arlington and the I-5 corridor.

State and Snohomish County officials have been discussing with families of victims the delicate matter of digging out the highway while more people and belongings likely are still buried in the mud.

To date, 36 victims of the mudslide have been confirmed dead, with county officials releasing the names of three more victims Thursday.

“It’s kind of sacred ground for them and we want to make sure we’re going in there in the most respectful way possible,” said Travis Phelps, a spokesman for the state Department of Transportation.

In the meantime, officials are also beginning to look at the longer-term economic effect of the slide. Residents are deeply concerned about the effects on Darrington’s economy and culture if the town remains cut off for months.

“Of course we need that road open. That’s our lifeline to the outside world,” said Kevin Ashe, a part-owner of the Darrington IGA.

The only other major route into town is on Highway 20 through Skagit County, which turns a 45-minute drive to Everett into a two-hour detour.

Crews so far have removed most of the mud from a few hundred feet of Highway 530 on the western edge of the slide area.

“We’ve made some progress but not a heck of a lot,” Phelps said.

Because much of the highway is still buried, it’s too early to tell whether the road will be salvageable, he said.

On the east side, part of the highway is still under water where the North Fork Stillaguamish River pooled up behind the slide. Even if the road can be repaired, the river’s ultimate course through the altered landscape will play a large part in determining if the road can remain in its current location, Phelps said.

If the road has to be rebuilt, topography of the surrounding area will be a factor, he said. Some steep hills are located south of the current highway right-of-way.

Engineers have begun studying possible routes, he said. When these become more developed, they’ll be shared with the public at later meetings.

Because of all these factors, it’s impossible to estimate when the highway could reopen or how much it might cost, he said.

The economic damage isn’t limited to just the highway. Damage to houses and other properties that were destroyed in the slide area is estimated at $6.77 million, according to a county assessor’s report released Thursday. About $919,000 of that was from the flooding.

More than 34 houses were destroyed and at least 10 manufactured homes, in addition to vacant lots, camping sites and other kinds of buildings, according to the report.

Because of the extent of the slide and the flooding, some areas have not been assessed yet, especially east of the slide near where a berm is being built.

While the federal government likely will reimburse the costs of rebuilding Highway 530, the longer-term recovery period is likely to come out of local pockets.

The economic hit to Darrington could be serious due to the reduced access and increased costs of getting to the town.

One worry, for example, is at what point people who commute into Darrington for jobs, or those who commute from Darrington to Arlington or the rest of the county, will decide the hassle of the commute isn’t worth the job.

In looking toward the longer term, the Puget Sound Regional Council has recommended that $5 million in federal funding be used to support economic recovery in Darrington.

The PSRC, an intergovernmental body that distributes about $240 million in federal transportation funding annually, will perform an unusual workaround to free up money that can contribute to Darrington’s recovery.

The PSRC’s federal money is earmarked for specific transportation projects, but some of those projects won’t come to fruition this year, leaving the PSRC money without a designated project. Snohomish County identified an ongoing project — the North Road project between Lynnwood and Mill Creek — that was funded with $9.8 million in local funds on top of $3.2 million in federal money.

By directing $5 million more in federal money to the North Road project, the PSRC will free up the same amount in county money from that project, which can in turn be redirected to projects in the Darrington area.

The county money will then be targeted at projects that will have an economic benefit for Darrington.

Darrington’s plan to add curbs, gutters, sidewalks and a storm drainage system to Fir Street has been identified as one immediate need. Other projects that might be considered are upgrading the Whitehorse Trail or more street improvements in the town itself.

These projects would not be eligible for disaster funds, but by directing more county money to them, they would have a positive economic impact and take a little of the burden off Darrington. An upgraded Whitehorse Trail, for example, could be a tourist draw for the town, Olson said.

The issue moves to the PSRC’s executive committee next week, where it stands a good chance of passing.

“I think the PSRC has a good history of counties supporting each other, especially in times of need like this,” said Snohomish County Councilman Dave Somers, who sits on the committee.

These smaller measures may help soften the impact of the closure of Highway 530, but it will by no means eliminate it.

After the collapse of the Skagit River Bridge on I-5 last May, a temporary span was in place less than a month later.

Highway 530 is an altogether different animal, Phelps said. Some kind of temporary road may be considered, but it is still too soon to make that decision.

“Here we have a much bigger emergency response underway,” he said.

There’s no one federal agency to turn to for help. Money could potentially come from the Federal Emergency Management Agency, the Federal Highway Administration and others, Phelps said.

“It’s going to be kind of an ongoing discussion,” Phelps said.

Meetings
Snohomish County and the state Department of Transportation have scheduled three meetings to discuss the situation regarding Highway 530, which was blocked by the March 22 landslide.