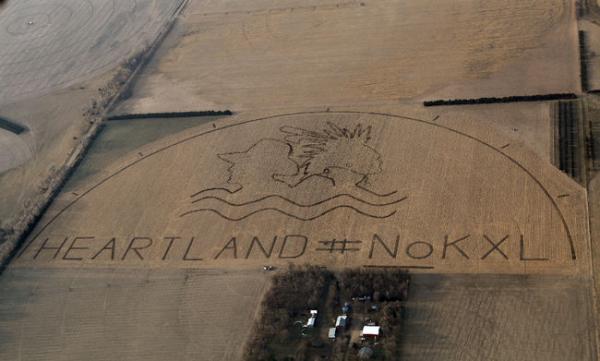 It’s a message not from an alien species, but from opponents of the Keystone XL pipeline.

Last week a crop-art image the size of 80 football fields was installed along the controversial pipeline’s proposed path in Neligh, Nebraska. The image includes the bust of a man in a cowboy hat and an American Indian in a porcupine roach with two feathers. Under the pair of heads is an illustration of water waves and the text, “HEARTLAND #NoKXL.”

The massive art installation, which was executed by artist John Quigley in partnership with the anti-Keystone XL Pipeline Cowboy and Indian Alliance, is meant to tell President Barack Obama to protect the heartland and reject the pipeline, according to Bold Nebraska, a coalition of groups and individuals opposing the project.

Opponents argue that it will contaminate drinking water and pollute the soil. Conversely, proponents state it will bring jobs to the U.S. The project has been controversial from the start, and now that the decision is down to the wire, the opposition is digging in even further.

“Jobs are not worth the risk of the future of our land,” Tessa McLean, Anishinaabe, a member of the Colorado American Indian Movement and an Idle No More activist, told Indian Country Today Media Network. “Even if the pipeline is safe, even if it never ever spills, it still takes the rights away from land owners. It goes through Indian country, and we don’t want anything going through our country without [our] consent. And Indians will never consent.”

The section of pipeline that still needs approval would cross the border from Canada, where the viscous bitumen originates in the Alberta oil sands, and cut through Montana, South Dakota, Nebraska and Kansas.

Ranchers, farmers and Native Americans who live on the pipeline route plan to descend on Washington, D.C. and camp near the White House beginning on April 22, which is Earth Day, to encourage the president’s support, according to the Cowboy and Indian Alliance website. On April 26, thousands of opponents are expected to join the campers and protest the pipeline.

Several camps are already installed along the pipeline route in Indian country. Descendants of the Ponca Tribe erected a camp in Nebraska in November. A second was established on the Rosebud Sioux reservation on March 29, and the Cheyenne River Sioux Tribe opened one on Saturday April 12.