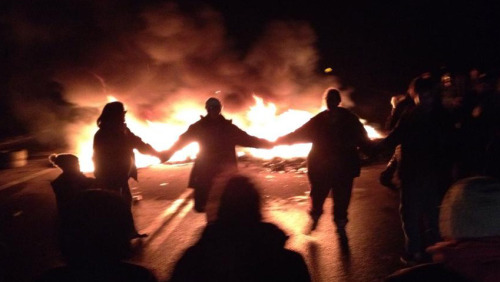 Another round of battles loom between the Mi’kmaq in New Brunswick and a Houston-headquartered energy firm exploring for shale gas deposits in the province.

SWN Resources Canada has submitted two proposals under the province’s environmental impact assessment process to drill exploratory wells in separate parts of New Brunswick. The projects were registered with the provincial environment department on Monday, according to an official.

The company plans to drill one well in Chipman, which is in central New Brunswick, and a second well near Richibucto, which is in an area that saw intense demonstrations against shale gas exploration last autumn.

The Mi’kmaq community of Elsipogtog is only about 17 kilometres west of Richibucto and its War Chief John Levi said SWN should again expect resistance.

“We are just getting ready to go back out there and stop them. It’s going to be rough,” said Levi. “It ain’t no game. This is our livelihood that is at stake. We are not going to allow it. It’s like they are trying to kill us slowly.”

SWN Resources Canada, which is owned by Houston-based Southwestern Energy Company, could not be reached for comment.

The Mi’kmaq, in an alliance with Acadians and residents of Anglophone communities in the region, led months-long protests against SWN Resources Canada. The Mi’kmaq feared the discovery of shale gas would lead to hydraulic fracturing, or fracking.

The company ended its shale gas seismic exploration work this past December amid burning tires and highway clashes between demonstrators and the RCMP.

The RCMP also launched a heavily armed raid of an anti-fracking camp anchored by the Mi’kmaq Warrior Society last Oct. 17. The camp was blocking a compound holding SWN’s exploration vehicles. The raid triggered day-long clashes and the burning of six RCMP vehicles. Police arrested about 40 people that day.

The company has applied to have its exploration wells approved under the province’s phased EIA process which allows some components of proposed projects to unfold amid the environmental review. The environment department is currently putting together a technical committee to review SWN’s proposed wells, according to a provincial official with knowledge of the file.

SWN wants to build two well pads for vertical drilling that will range in depths between 1,000 and 4,000 metres. The company wants to determine the geology of the area by examining rock samples coming out of the holes, according to the provincial official who has read the company’s proposal.

The environmental assessment will also include input from the public.