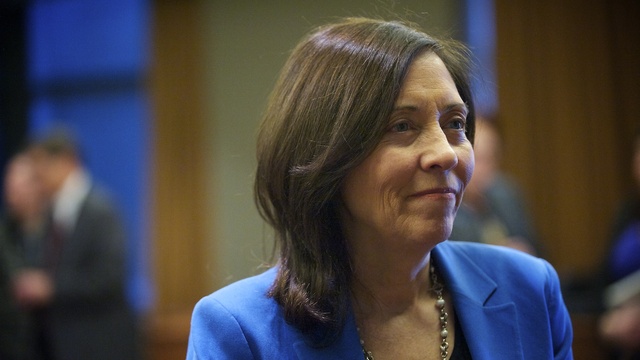 Sen. Maria Cantwell, D-Wash., visits with the public after she held a discussion about raising capital for small business at Vancouver City Hall on Wednesday. | credit: Zachary Kaufman/The Columbian | rollover image for more

Gov. Jay Inslee, who will have the ultimate say over the construction of what would be the Northwest’s largest oil-by-rail transfer terminal in Vancouver, hasn’t taken a stand on the project. But members of the state’s congressional delegation are weighing in.

U.S. Sen. Maria Cantwell, D-Wash., was in Vancouver on Tuesday and stopped to visit with The Columbian’s editorial board.

Cantwell was asked if she were a Vancouver resident, would she support building the oil-handling facility?

“It wouldn’t be something I would be promoting,” she said.

She said safety is one of her foremost concerns. In a letter to the Senate Appropriations Committee earlier this month, Cantwell, along with other senators, called for more federal dollars going toward addressing safety issues related to transporting crude oil by rail.

“We’re certainly willing to introduce legislation to put requirements on rail car safety because we don’t think it exists now and we’re not waiting for a voluntary system. We’re not waiting for these guys to get their act together,” Cantwell said. “We’re going to push this year.”

Earlier this week, BSNF Railway officials told Vancouver city councilors they would spend millions to prepare first responders in case of an oil spill. City officials have expressed concerns over ensuring the oil travels safely on the rail line, which runs through downtown and by the proposed waterfront development on the old Boise Cascade property.

Although city officials don’t have a say over the $110 million project proposed by Tesoro Corp. and Savage Companies, they could join other cities, such as Seattle and Bellingham, that have called for a moratorium on new oil-transport facilities until safety concerns, ranging from oil spills to explosions, are addressed.

“This industry has grown far greater than our capacity to deal with it and we need to slow down and get this right,” Cantwell said.

The proposed Tesoro-Savage oil terminal could handle as much as 380,000 barrels of crude per day. The facility would act as a transfer point for oil, arriving by rail to the Port of Vancouver and leaving by water.

Cantwell said she recently pressed the U.S. Coast Guard for details on any safety plans in place for an oil spill.

“So we did get the comment on the record at the hearing that, yeah, we don’t really have a plan … We were glad we were able to clarify that point because we want people to understand there is no solution there,” she said.

Cantwell said she wants to hear about “what people here say about the situation.”

“I get the sense that Vancouver is painting a different picture of where they want their economy to go long-term,” she said.

Sen. Patty Murray, D-Wash., the chair of the Senate Appropriations Subcommittee on Transportation, Housing and Urban Development, recently held a hearing to question officials from the Obama administration and city of Seattle about the safety of rail transport of crude oil.

But in the last three years, she’s said, she has heard a lot of talk about wanting more trains, moving more commodities.

“If these folks can demonstrate they will be good community partners and meet environmental hurdles, then we should talk about it,” she said.

The governor is waiting to receive a recommendation from the state’s Energy Facility Site Evaluation Council before making a decision.