Washington state officials have postponed selling 250 acres of timber on steep slopes near the town of Oso.

The Washington Department of Natural Resources had scheduled the 188-acre “Riley Rotor” timber sale and the 62-acre “Home Repairs” timber sale for auction this Wednesday, a month and a day after the March 22 landslide that killed at least 39 people in Oso.

The Riley Rotor site is on state land about five miles southwest of the deadly Oso slide. Much of the site is so steep that the DNR had proposed logging it with helicopters.

Helicopter logging would allow the state to sell an estimated $1.3 million worth of timber from the site without building new logging roads through the steep landscapes of the Stillaguamish River basin. Cutting roads into the hillsides could worsen the risk of landslides, according to the DNR.

In January, the Washington Forest Law Center urged the DNR to leave parts of the area uncut to further reduce the landslide risk.

The environmental group said the proposed cut would put up to a dozen homes, as well as salmon streams, below the proposed sale at risk. It also expressed concern about the combined impact of the sale with logging proposed just uphill, on land owned by Weyerhaeuser.

The DNR replied that maps showing a historic landslide on the site — which would indicate the site’s vulnerability to more sliding — proved to be incorrect once geologists, biologists and foresters from the agency and from the Tulalip Tribes walked the site in person.

The agency formally approved the Riley Rotor sale on March 4.

“There are essentially no geologic or lithologic similarities between the site of the Riley Rotor timber sale and the Oso landslide,” DNR geologist John McKenzie wrote on April 14. The two sites “could hardly be more different,” he wrote. 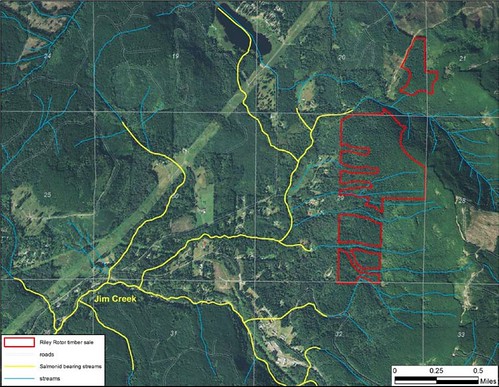 “It was kind of funny because it was just Tuesday, on the 15th, that we got some correspondence from DNR confirming they were going to proceed with the sale,” Whittaker said.

By Friday afternoon, the DNR had reversed itself.

“We’re hoping this reversal is a signal that DNR is committed to changing the way it logs on steep and unstable slopes,” Whittaker said.

“We really did have a thorough review beforehand, but prudence and the changing conditions dictated the decision to postpone until further review,” said Kyle Blum, a deputy supervisor with the Department of Natural Resources.

Blum said the DNR is also reviewing other timber sales in the Oso area to make sure none of them put public safety at risk.

On Wednesday, the agency postponed the auction of its Home Repairs timber sale in Skagit County, about 17 miles northwest of the Oso slide. That sale of an estimated $770,000 worth of timber would require building a mile and a half of logging road on Cultus Mountain above Nookachamps Creek, which supports six species of salmon.

“Most of the sale area is located on a deep-seated landslide,” according to DNR documents.