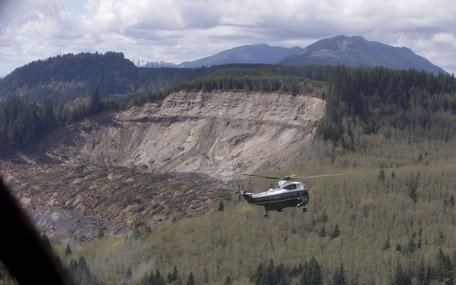 By Rikki King and Amy Nile, The Herald

EVERETT — President Barack Obama saw the devastation of the Oso mudslide for himself today, touring the area by helicopter.

Marine One flew directly over the site, giving him a view of the massive debris field and blocked North Fork Stillaguamish River

A couple of bright-yellow excavators could be seen operating below, digging in the earth as part of the ongoing effort to recover the bodies of those who died. Amid the wreckage, an American flag flew at half staff.

Marine One touched down at Arlington Airport about 1:30 p.m.

The president then headed off by motorcade to Oso.

The visit marks one month since the disaster that took at least 41 lives and destroyed part of a state highway.

The president planned to meet with victims’ families, survivors and first responders in Oso.

Obama last visited Snohomish County in 2012 to tour the Boeing Co.’s 787 production line at Paine Field. He is the sixth sitting president to set foot in the county, and the first to come here after a public tragedy.

The governor, Murray and Cantwell accompanied Obama in his helicopter.

A sparse crowd gathered nearby to watch, but they were outnumbered by media and officials.

The president was expected to meet face-to-face with people who have been wrestling with the loss and challenges since the hillside fell on March 22.

Police and fire vehicles were lining up along the Arlington Airport entrance by 11:30. Snohomish County Sheriff’s Lt. Rodney Rochon leaned out his window to greet the arriving state motorcycle troopers. Black SUVs with Maryland plates followed them in onto the airfield.

Families and couples with babies and lawn chairs arrived at the airport, hoping for a glimpse of the president. They looked up as helicopters hummed overhead. Some waved at the sky. A toddler in a yellow jacket played in the grass, her mother’s watchful eye following her.

By 1:15 p.m., engines were running in the motorcade. Secret Service agents gave the vehicles a quick rub with dust rags, making them shine. They straightened the small flags on SUVs and applied a presidential seal decal.

Activity in the motorcade became still as multiple CV-22 Ospreys and other aircraft landed on the tarmac at Arlington Airport.

Firefighters from Arlington and Marysville snapped pictures as Obama got into the motorcade and headed away toward Oso.

Larsen, who grew up in Arlington, said in a prepared statement. “The President’s visit today underscores the country’s commitment to helping Oso and Darrington heal and recover. I am pleased President Obama will meet with survivors and community leaders to hear their stories. He will learn about the many challenges of rebuilding but also the incredible resilience of the people in these communities.”

Obama “will see this strength in action today,” Larsen said.

Aboard Air Force One en route to Everett, press secretary Jay Carney told reporters that the Obama administration “remains focused on supporting the state and local efforts, and first responders.”

The president earlier declared a major disaster in Oso, freeing up resources.

“I think the purpose of the visit, which will include remarks delivered at the Oso firehouse, is to view firsthand the aftermath of the terrible mudslide there, and to meet directly with those who lost loved ones and have suffered so much in this terrible tragedy,” Carney said.

Officials have now identified all 41 of the people confirmed to have died in the slide. Two other people presumed killed remain missing.

Highway 530 remains blocked. A flood warning is in place for the area east of the slide along the North Fork Stillaguamish River until Thursday afternoon.

The Secret Service began arriving in Arlington, Darrington and Oso weeks ago after Obama’s visit was announced. Military aircraft could be seen flying in Marysville and Arlington over the weekend as the president’s visit approached.

Obama last was here on Feb. 17, 2012, when he toured The Boeing Co. plant in Everett and spoke to factory workers. That year was the first time in nearly two decades that a serving president visited the county.

After visiting Snohomish County, Obama is scheduled to go to Asia, with stops in Japan, South Korea, the Philippines and Malaysia, according to the Associated Press.

On Monday, the Federal Emergency Management Agency announced that assistance had been approved for people in the Arlington, Darrington and Oso areas whose commutes to work, school and medical appointments are detoured around the slide, through Skagit County. That will happen through individual FEMA assistance applications.

Businesses that need help should contact the Small Business Administration at www.sba.gov/disaster or 800-659-2955.

Pool reports contributed to this story.