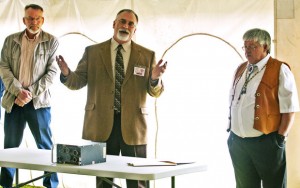 American military pilots and their crews will be counting on employees of a company owned by Montana’s Confederated Salish and Kootenai Tribes.

The Missoulian reports that S&K Electronics will manufacture a key component that will be used in the Common Missile Warning System utilized by military helicopters to deter surface-to-air missiles, among other things. The announcement of the contract from BAE Systems, worth $1.8 million, came at a press conference in Pablo.

Larry Hall, the president and general manager of S&K Electronics, was beaming as he spoke to the crowd.

“We’re here to signify a growing relationship with BAE Systems,” he said. “It’s a major customer that we’ve had for several years. It’s reaching new milestones. We want to recognize this particular level and also make our workforce aware of what it means to the eventual user, which is the war fighter. One of the things that this particular system does is protect the people in the low-flying, slow-flying vehicles like helicopters, and that is a major, major effort.”

Hall said that the CMWS has saved a significant number of lives in the past several years, both in Afghanistan and Iraq.

U.S. Rep. Steve Daines, R-Mont., praised the economic impact, saying “These are manufacturing jobs that could be anywhere, and they’re right here up in the Flathead.”

U.S. Sen. John Walsh, D-Mont., noted that he has a son who flies a Blackhawk helicopter and has been deployed to both Iraq and Afghanistan.

“So I know how important this piece of equipment is, not only to our active duty military, but for our Reserve component service members, men and women who are flying aircraft right out of Montana,” Walsh said. “So I want to thank you for providing this service to the men and women who serve in our military.”

Daines and Walsh are running against each other this year for Walsh’s Senate seat.