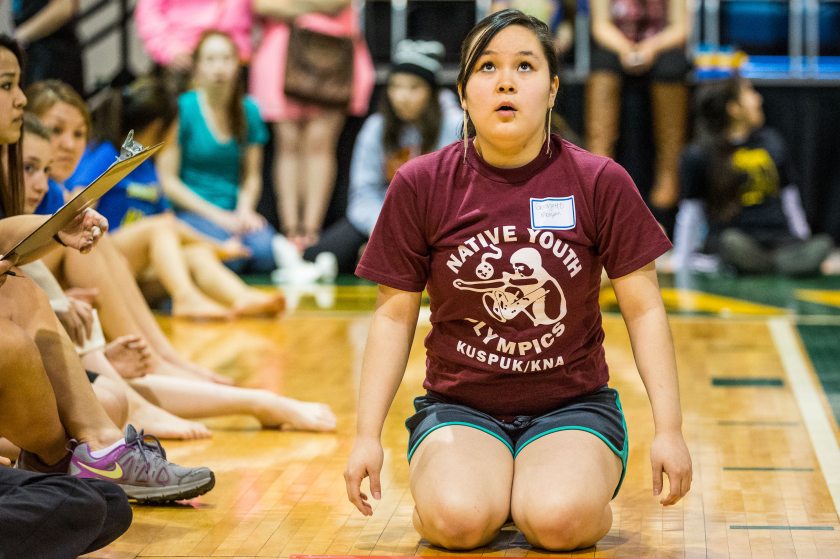 Georgette Morgan gets ready to compete in the kneel jump. Nearly 500 student athletes from across Alaska are in Anchorage this week to compete in the 44th annual Native Youth Olympics. Apr 24, 2014
Loren Holmes photo

The entryway of the Dena’ina Civic and Convention Center was packed Thursday afternoon. More than 500 student athletes from across Alaska had gathered, some dressed in matching T-shirts and colorful kuspuks, to represent their heritage, communities, regions and schools at the Native Youth Olympics.

Magdaline Kapatak stood in the middle of a group of her classmates from Koliganek School in Dillingham, awaiting their turn to strut their stuff in front of peers, parents and an audience of supporters.

Kapatak has been going to Anchorage to compete in the annual spring games since the eighth grade. This year, she is competing in multiple events, including the kneel jump, Alaska high kick, seal hop and two-foot high kick.

“I would have to say my favorite is the Alaska high kick,” said Kapatak, smiling. “There is just something about it, and it’s a family thing. A lot of my family competed in it, like my brother and my sister. They came here often and placed.”

She said the trick to success is inner and mental strength, along with a lot of hard work. “For students competing for the first time, there isn’t pressure yet to win or place, just have fun.”

Before long, the line full of students was moving. The audience cheered as they were introduced. Some smiled, others blushed and a couple of them raised their hands above their heads and hollered.

Hundreds of students from seventh to 12th grade sat on the floor and waited for the long list of speeches to begin. Elders, Native corporation leaders and sponsors worked to inspire and encourage the young athletes by preaching a set of key core values: self-respect, respect towards others, healthy choices and honoring traditions.