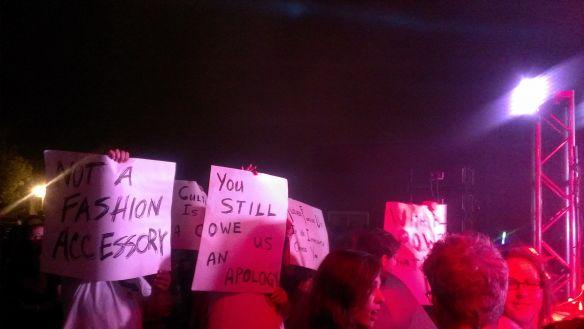 NORMAN, Oklahoma – Eradicating Offensive Native Mascotry, a group of Native parents and their allies from across the country were alerted to Oklahoma Governor Mary Fallin’s daughter, Christina Fallin’s latest gaff when her band Pink Pony announced via Facebook “I heard Pink Pony was wearing full regalia tonight.” Protestors led by Choctaw musician Samantha Crain staged a protest at the Norman Music Festival in Oklahoma, as Native Americans were outraged on social media when Fallin wore a Native American-style fringed shawl with the word “Sheep” on the back and performed a fake war dance while her boyfriend Steven Battles ridiculed the protesters and flipped them off from the stage.

Earlier that day, Crain said on her Facebook page, “Publicity stunt or not, even if they are lying, their attitudes, their insincerity, their irresponsibility, their general lack of caring about anything other than the advancement of themselves deserve a protest. So I will be at the Pink Pony show at NMF tonight. Midnight. black watch stage. Peacefully and quietly picketing with signs to tell them how I feel.”

Some of the signs said: “culture is not a costume”; “with all your power, what will you do?”; “you still owe us an apology”; “don’t trend on me”; “I am not a costume” and “please forgive us if we innocently oppose you.” The last sign was a take on Fallin’s non-apology after she posted a photo of herself misappropriating Native America regalia reserved for highly honored leaders for a glamour shot to promote her career. Faced with more Native American protests Fallin attempted to have Crain and supporters removed by security, but they were allowed to remain on private land adjacent to the stage.

RELATED Oklahoma Gov’s Daughter: A Woman in a Headdress Is ‘a Beautiful Thing’

According to a tweet by Chahta Summer, a Choctaw mother, and recent law school graduate Fallin’s shawl with “sheep” written on the back was

a direct swipe at Native Americans. “Their supporters were calling us sheep the last time, saying we called her out to be PC, not thinking for ourselves,” Summer said.

Cherokee EONM member and blogger Jennie Stockley posted to Pink Pony’s Facebook page, “Apathy towards the clear feelings of other people is cruelty. Her apathy based to Native culture is racist. No opaqueness in this issue. It is clear. We will not stand silent while she degrades honored and sacred symbols.”

RELATED Baby Veronica and the Future of ICWA: What’s Next

The Fallin family has faced controversy with the Native American community both in Oklahoma and nationally last year when Governor Mary Fallin helped facilitate the forced adoption of a Cherokee girl, Veronica Brown, from her Cherokee family who were found to be fit parents by the courts 1,000 miles away to a white South Carolina couple who had used questionable adoption practices to dodge the Indian Child Welfare Act. That act seeks to protect Native American tribes from mass removal of their children; a potential violation of the Geneva Conventions on Genocide. Oklahoma has one of the largest Native American populations in the country and has 38 federally recognized tribes.

EONM asked the Riverwind Casino, Blackwatch Studios and Christina Fallin and Governor Mary Fallin to apologize for this direct attack affront to Native American concerns regarding the misuse of Native culture and purposeful insult to Native Americans in general.