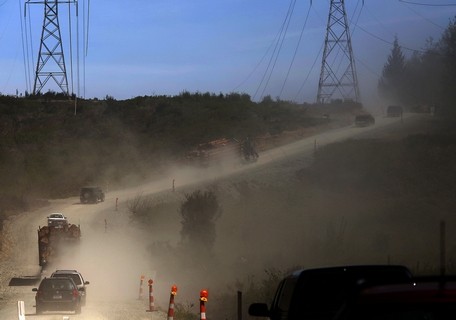 Mark Mulligan / The Herald
Vehicles kick up dust as they travel eastbound on the service road bypass of Highway 530 toward Darrington Tuesday afternoon. Photo taken 20140429

By Chris Winters,  The Herald

It didn’t take long for grateful commuters to line up. State Department of Transportation spokesman Travis Phelps said as many as 60 vehicles at a time queued up to make the trip past the slide zone on the first day.

The access road off Highway 530 is accessible around the clock to local traffic, providing a much-needed lifeline to Darrington.

In many ways, it’s like a ferry line for passage to a remote island, with cars queueing up and neighbors getting out to chat to await the signal for the convoy to move forward.

Naomi Lieurance had gone to an appointment in Mount Vernon Tuesday morning with her shi tzu, Harley, via the Highway 20 route.

She had heard about the road opening during the day and was now waiting in line in Oso to return home to Darrington, hoping the new route will improve her access to the rest of the county.

“It’s got to be better than the Mountain Loop Highway,” she said.

She chatted in line with fellow Darrington resident Jake Sowers, who came over the access road earlier in the morning with his wife and was now heading home.

“I didn’t think it was as bad as I thought it was,” Sowers said. Approximately two dozen vehicles, including several logging trucks, made the 1:30 p.m. trip past the slide area to Darrington.

The view along the two-mile access road is not for the faint of heart, however.

The route skirts the edges of the slide zone. Trackhoes and construction vehicles below are dwarfed by a surrounding sea of rolling hillocks of mud and giant piles of broken timber. An American flag hangs from halfway up a denuded tree trunk.

The convoy passes stands of birch trees with new leaves and a pile of mangled cars. Behind it all is the exposed slope of the 650-foot cliff that slammed down into the valley on March 22.

“The horrific magnitude of it doesn’t sink in until you’ve seen it,” said Sowers, who laid eyes on the slide for the first time Tuesday morning.

A former ship’s mate, Sowers said, “I’ve seen some sad things in my life. I once surveyed a sunken ship, and this is right up there with it.”

The unpaved route is steep in places, with the convoy kicking up dust as it creeps over the hills.

No vehicles pulling trailers are permitted. The speed limit is a constant 10 miles per hour, and no stopping is permitted along the two-mile route.

The pilot cars and security at the two ends of the road are staffed by contractors hired by the state. Granite Construction Co. of Everett has been awarded a $3.4 million contract to maintain the access road and drive the pilot cars. Another firm, Seattle-based Central Protection, is providing security services.

The route is expected to remain open until at least one lane of Highway 530 is reopened. When that will happen is not immediately known, Phelps said.