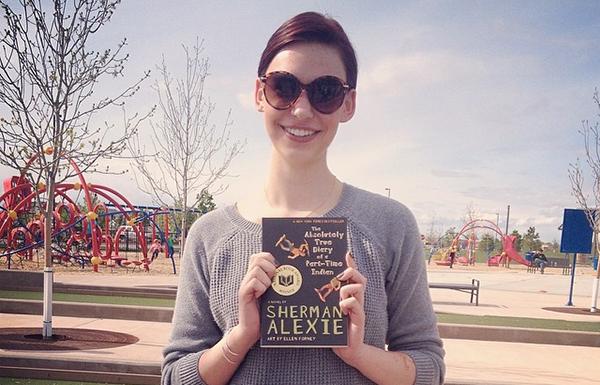 When it comes to banning books, it’s the same old story — tell someone they can’t read a text and you’ll just make them seek it out.

In Meridian, Idaho, parents succeeded in getting Sherman Alexie’s The Absolutely True Diary of a Part-Time Indian removed from the curriculum of Mountain View High School. The book, published in 2007, won a National Book Award, but has become a frequent target of parents seeking to sanitize their children’s reading material because of some language and frank discussion of sexuality. In Meridian, some object to the book as anti-Christian as well.

The book is not “banned” per se, but “challenged” — it has been taken off the school reading list, but remains on the school library’s shelves, pending review.

Stacks of Alexie’s book, which was handed out for free on World Book Night.

When Sara Baker, a student at the University of Washington, and her friend Jen Lott, learned that the book had been challenged, they decided to get involved. They started a page at GoFundMe.com to raise funds to purchase 350 copies of the book, which they planned to distribute for free to Meridian students. The campaign met its goal, and the books were purchased through Rediscovered Books, a bookstore in Boise. Brady Kissel, a junior  at Mountain View, spearheaded the plan to distribute them, and on the evening of April 23 — World Book Night — over 225 copies were handed out, and the rest went to Rediscovered Books, where they remained available for free.

Today, Rediscovered announced on its Facebook page that it had run out of books — but this isn’t over yet. Alexie’s publisher (Little, Brown Books for Young Readers) donated another 350 copies, which are on their way.

Alexie himself weighed in on the matter, writing in a letter to his publisher, “I am honored by the hundreds of Meridian students who showed incredible passion and courage for books. Mine, yes, but literature in general. And Sara Baker and Jennifer Lott are friggin’ superheroes. If I ever get caught in a fire, I’m calling them.”