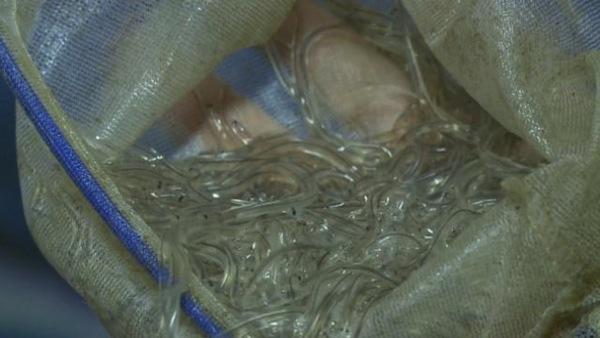 But according to Fred Moore III, the Passamaquoddy Tribe’s Fisheries Committee Coordinator who was charged, the fight for Native fishing rights is soon to become a bigger issue than the battles in Maine and New York.

Moore, his two sons and five other Native men, including citizens of the Unkechaug, Shinnecock, Mohawk and Anishinaabe nations, were charged with possession of American eels in excess of the New York State limit; possession of undersized American eels, and not having a state-issued food fish permit. All three charges are considered felonies because the value of the eels in the group’s possession was more than copy,500. They were also given misdemeanor charges of conspiracy to commit a crime and using an eel trap with a mesh size smaller than the minimum limit allowed, according to Lisa King, spokesperson for the New York Department of Environmental Conservation (DEC), in an e-mail response to an ICTMN request for comment.

King said the eight men “surrendered themselves” to DEC officers on April 8. She did not respond to questions seeking the state’s position on tribal sovereignty and aboriginal fishing rights. The men are scheduled for arraignment on June 25.

The Passamaquoddy Tribe has been locked in battle with the State of Maine for the past two years over the tribe’s treaty and aboriginal right to fish for elvers, tiny baby American eels also known as glass eels. Citing concerns about the dwindling number of American eels available, the state wants to limit the number of permits the tribe issues. The tribe says every member has an inherent right to fish, but its conservation plan limits the total amount of elvers the tribe can harvest. Ironically, until this year the state limited the number of permits it issued but allowed an unlimited harvest of baby eels. This year under threat from the Atlantic States Marine Fisheries Commission (ASMFC) to shut down the fishery, the state has caught up to the Passamaquoddy’s traditional conservation knowledge and reduced and limited the total allowable catch.

Moore, who is working at Unkechaug under tribal authority, told ICTMN that the matter of Native fishing rights is soon to become a central issue for eastern coastal nations. The Penobscot Nation is already embroiled in a federal lawsuit against the State of Maine over hunting and fishing rights. The lawsuit is supported by the Interior Department, which has entered the case as both intervener and plaintiff, and the Passamaquoddy Tribe is thinking about intervening, Moore said. In an interview with ICTMN, Passamaquoddy Chief Clayton Cleaves at the tribe’s Sipayik community, said the council will also consider a separate legal action.

“What we’re doing here is providing Unkechaug with technical assistance in implementing their eel management plan,” Moore said. “But we’re also here to assist other tribes in formulating a position for a class action suit against the Atlantic States Marine Fisheries Commission. The ASMFC has an American eel management plan that deals purely with member states and only references Native Americans. We don’t want equal status [with states]—want to be exempt from inadequate management mechanisms which cater to the economic interests of competing jurisdictions. We can’t have any part of it because they‘re completely inconsistent with indigenous culture.”

The ASMFC, created in 1942 by Congress, represents 15 Atlantic coastal states with a stated mission of “promoting and protecting Atlantic coastal fishery resources.” Each state has three representatives on the commission: the director of the state’s marine fisheries management agency, a state legislator, and an individual appointed by the state governor to represent “stakeholder interests,” according to the organization’s website. The United South and Eastern Tribes’ 26 member tribes, whose aboriginal and reservation territories are predominantly along the Atlantic coast, are not represented on the commission.

Moore said he wasn’t fishing on the night of March 28 when the men were ticketed for violations, but that the group had fishing permits issued by Unkechaug. The DEC was alerted to the group’s activities in a creek on Long Island’s east end and waited in the weeds for the tribal members to come back and start emptying their nets of elvers, Moore said.

“They were aware that the Unkechaug had issued permits, but they made a policy statement by charging us and basically treated these folks like they’d just robbed a 7-11 at gunpoint,” Moore said. “And to be branded as poachers is laughable—Passamaquoddy has offered the state assistance in apprehending poachers.”

If DEC authorities hadn’t “pounced” on the group, Moor added, they would have seen the men stock most of the elvers above artificial barriers—which is one of the conservation techniques he is implementing for the Unkechaug.

Unkechaug Chief Harry Wallace called the charges “ridiculous…. It was a multi-tribal project, and the whole idea is to restore the fishery all along the northeast coast,” he said. “If we don’t do it the whole fishery will be destroyed if they [the state] continue their practice.”

New York State allows a massive taking of eels six inches and longer, but prohibits the taking of elvers. The tribe has imposed a moratorium on the taking of adult eels, each of which can spawn tens of millions of elvers, Wallace said.

“Our goal is to restore 50 percent of what we take. We put them above a manmade obstruction so their chances of survival are enhanced,” he said. “This is a Native practice.”

To date, the Nation has successfully stocked more than 10,000 glass eels into Mill Pond and East Mill Pond at the headwaters of the Forge River adjacent to the Unkechaug Indian Reservation near Mastic, New York, said Wallace, adding that the DEC violated its own policy by filing felony fishing charges against Nation members and employees operating under the authority of the Unkechaug Nation American Eel Management and Restoration plan without first consulting the Nation.

“After being advised that Unkechaug eel restoration activities were being conducted under license issued by the Nation, ranking officers and representatives of the DEC acknowledged that they were aware of the license but refused to void the charges,” Wallace said. “Instead, DEC officials made racially disparaging remarks concerning the inherent rights and responsibilities of Native Americans, insisting that the Unkechaug eel fishery is a front for the illegal exportation of glass eels to other states.”

The Nation is contemplating legal action against the state, Wallace said.

On April 17, Chief Clayton Cleaves and Chief Joseph Socobasin of the Passamaquoddy communities at Sipayik and Motahkomikuk, respectively, wrote a letter of “support and commitment” to Wallace.

“Please be assured that your efforts to secure the rights and interests of your people while ensuring the sustainability of the American eel within their natural range will benefit all Native people on the east coast, including others who do not understand the cultural and spiritual relationships we have developed over several millennia of existence within our territories,” they wrote.

The chiefs said they are committed to working with Unkechaug “in defense of the marine environment, its resources and fishing rights of indigenous people.”