The never-realized plans to build a nuclear power plant on Kiket Island has a legacy that’s proven useful to the Swinomish Tribe.

The 1969 power plant proposal attracted researchers to study the island’s ecology. Among these was then-graduate student Jon Houghton, who established permanent transects around Kiket Island to study intertidal ecology and measure, among other things, clam density and biomass. In 2011, Swinomish shellfish biologist Julie Barber worked with the tribe’s water resources program to survey the same transects as Houghton to quantify ecological change over the past four decades. 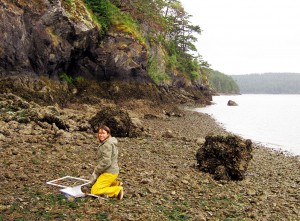 In the decades since the power plant plans were scrapped, Kiket Island was privately owned. For at least the past two decades, tribal members were discouraged by upland owners from harvesting on the tribally owned tidelands. This long-term lack of harvest pressure now provides Swinomish with the unusual opportunity to study unharvested clam populations.

In 2010, the Swinomish Tribe and the state of Washington purchased the island and now jointly manage it as the Kukutali Preserve.

At the time of Houghton’s surveys, butter clams were the preferred shellfish harvested on Kiket Island. Since no one had been harvesting there for two decades, Barber was not surprised to learn that the number and size of butter clams has increased substantially since the 1970s.

The biomass of native littleneck clams, on the other hand, has declined significantly, and researchers don’t know why.

Comparing the data from Kiket Island with other nearby beaches shows that the littleneck clam decline appears to be a trend. The increase in butter clams is believed to be a trend on these other beaches as well, but Barber doesn’t have enough data yet to know for sure.

Barber is working with other tribes and the state Department of Fish and Wildlife to compare data throughout the region. Her eventual goal is to create a Puget Sound map that shows the temporal change in bivalve biomass by bivalve management region.