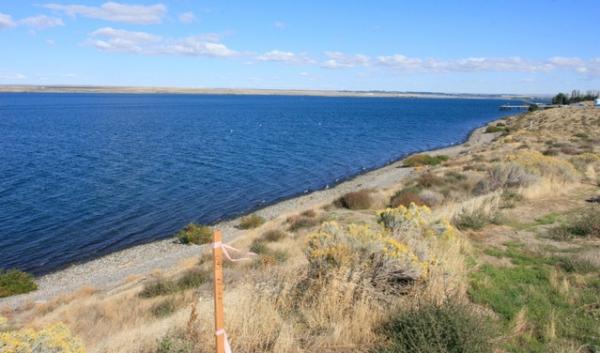 The Columbia River Intertribal Fish Commission says the white dots in the water are tribal fishing buoys and the wooden stake marks the beginning of the proposed Morrow Pacific coal export project site at the Port of Morrow in Boardman. | credit: Courtesy of CRITFC

An Oregon coal export developer is challenging claims that its proposed dock on the Columbia River would interfere with tribal fishing sites.

The Confederated Tribes of The Umatilla Indian Reservation and the Confederated Tribes and Bands of the Yakama Nation have submitted letters and affidavits to the Oregon Department of State Lands indicating they have tribal fishing sites in the area where Morrow Pacific has proposed to build a dock in Boardman, Oregon for coal barges.

The Morrow Pacific project would transport around 9 million tons of coal per year from Wyoming and Montana to Asia. The coal would be delivered by train to the dock site in Boardman, where it would be transferred to barges on the Columbia River. The barges would carry the coal to another dock site downstream near Clatskanie, Oregon where the coal would be transferred onto ocean-going ships.

Morrow Pacific needs a permit from the DSL to build a dock at the Port of Morrow in Boardman. DSL rules say the state can issue the permit as long as the action would not “unreasonably interfere” with preservation of water for navigation, fishing and public recreation.

The company submitted a letter to the state Thursday arguing that its dock will not “unreasonably interfere” with fishing. It also argues that considering fishing impacts from the dock is outside the DSL’s authority for this permit.

Brian Gard, a spokesman for Morrow Pacific, says the company disagrees that tribes have proven their members fish at the dock site. He says the affidavits submitted to the state either misidentify the site geographically or they fail to show that tribal fishing has taken place in the dock location.

“We do not believe they establish tribal fishing or tribal fishing sites at the Port of Morrow industrial Dock 7 site,” Gard said. “Understanding the site context is important here. The proposed dock site is in a heavily industrial area. It’s on port of Morrow property. It’s situated between two other docks. It’s an area designated by the state as an area where docks are to go.”

The company submitted declarations from local community members, the port director and tugboat operators who say they haven’t seen tribal fishing taking place at the dock site. It also consulted a fishery biologist who says the dock area does not support a healthy fishery.

Sara Thompson, spokeswoman for the Columbia River Intertribal Fish Commission, which includes the Umatilla and Yakama, released a photo (above) she says shows a set of tribal fishing buoys in the water next to the proposed Morrow Pacific project site.

“Not only have we been fishing there since time immemorial, but we continue to fish there at the present time,” said Chuck Sams, communications director for the Umatilla tribes. “We have provided affidavits to the Corps of Engineers and Oregon Department of State Lands, and we’ve spoken directly with Ambre Energy and Morrow Pacific explaining that we have fishing sites, usual and accustomed, at their proposed facility.”

In a recent speech, Gov. John Kitzhaber noted the conflicts flagged by the tribes shortly after declaring his opposition to coal exports in the Northwest. The governor said he will do all that he can “under existing Oregon law to ensure that we do not commit ourselves to a coal-dependent future.”