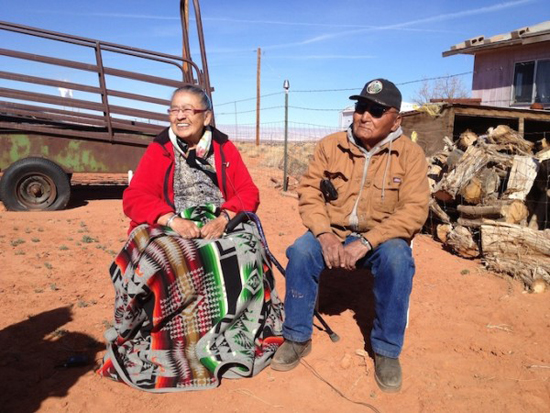 Margie Tso and her husband, Alvin, at their family ranch.
Credit George Hardeen

Turning on the lights or opening the fridge are things many of us take for granted. But if you’ve never had electricity, they might seem like luxuries. Now, for dozens of families on the Navajo Nation, those luxuries are becoming a reality. As Arizona Public Radio’s Aaron Granillo reports, more than 60 families will soon have electricity for the first time in their lives.

Margie Tso has a beautiful view from her family ranch on the Navajo Nation, just southeast of Page.

From her front yard, you can see miles and miles of red and orange sandstone. And LeChee Rock, a sacred mountain to the Navajo people. But from the backyard, there’s a clear view of the Navajo Generating Station, which has been supplying electricity all over the southwest since 1976. But not to Tso’s house.

“At times we kind of grumbled about it, but what could we do? I was brought up in the same matter that I learned to deal with,” said Tso. “Building a fire out of wood, using the charcoal for everything. Making bread, cooking meat, making stew, and such and such.”

But all of that has changed because of a nearly $5 million joint project that’s bringing electricity to certain areas of the Navajo Nation, including Tso’s ranch.

“It’s sort of a miracle for people to live like that,” said Tso. “Flip on a light. Get your remote. Your pleasure’s right there before you.”

Although the Navajo Generating Station has been producing electricity for decades, it’s not legally allowed to provide power to the Navajo Nation. That ownership and sovereignty belongs to the Navajo Tribal Utility Authority. But according to officials, they’ve never had enough money to build power poles in remote parts of the reservation. That is until now.

Additional funding came from the Navajo Nation Abandoned Mine Lands program and the U.S. Department of Housing and Urban Development. By 2015, the project will bring electricity to 63 families.

Using ice to keep food fresh is what Pearl Begay did for decades. She lives just up the road from Tso’s ranch. Pearl only speaks native Navajo, so her daughter, Daisy, translates.

“She said she like her electric. The lights mostly, and her refrigerator.” said Daisy.

According to Daisy and Pearl, they should have had power a long time ago. They claim they were promised electricity nearly 40 years ago, while the Navajo Generating Station was being built.

“They built the plant right there, and they forget them,” said Daisy.

“They started giving us hope, giving us hope,” said Tso. “And then they say, ‘It’s going to cost too much.’ And so then I just lost hope. I thought, ‘Well, whatever. I guess I won’t have electricity at the ranch.’”

But now that she does, life has become much easier.

“(It will) be quicker to do things than trying to hook up this and that, or run out of gas and run to town to get more gas,” said Tso. “A miracle happened that it came through.”