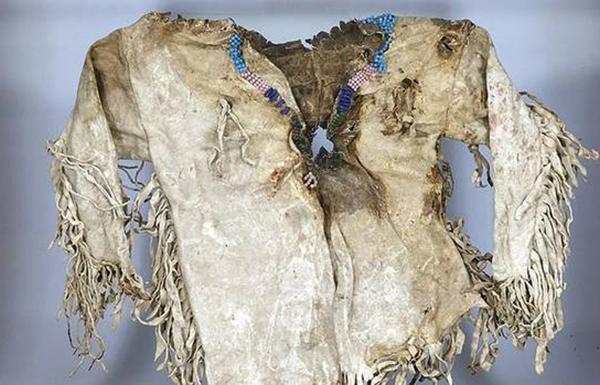 When the Toronto-based Waddington’s auction house held a pre-show viewing of items to be sold during its auction of the late William Jamieson’s collection, a blood-stained “Northern Plains Indian Child’s Tunic,” complete with a bullet hole, was among the items. An outpouring of anger ensued, and Waddington’s soon pulled the item from the listing.

Responding to the outcry, Waddington’s President Duncan McLean told the Globe and Mail, “We don’t want to upset anybody, so are withdrawing the item and returning it to the consignor.”

Though Waddington’s responded by removing the item to be auctioned, several more native artifacts were auctioned from April 29th to May 1st, including a Pair of Lakota moccasins said to have been owned by Sitting Bull, which sold for $9,000, a Sioux Saddle blanket and pouch, which sold for $3,120, an Iroquois False Face Society Mask, which sold for $2,640, and more.

The child’s tunic was of interest to Jamieson because the garment had a bullet hole in the center of the chest and visible blood stains. Jamieson was known in the rare-item collectors world as the “Master of the Macabre” — a label backed up by his collection of items on auction at Waddington’s. In addition to the Native artifacts, other items listed at Waddington’s included an electric chair, a bone model of a guillotine, a medieval wrought-iron ‘Shame’ mask and more.

The items on sale at Waddington’s also caused an outcry from First Nations communities in Canada. In particular, the Haudenosaunee Council forbids the sale or exhibition of medicine masks.

Hayden King, a member of Beausoleil First Nation who teaches history and native politics at Ryerson University, told the Globe and Mail,  “I’m generally of the belief that they should be returned. Some government agencies and museums agree, but the market includes many players who do not.”

“It all reflects this apparently endemic belief that native people are extinct, so we can do whatever we want with their stuff,” said King.

Sean Quinn, Waddington’s decorative arts specialist who appraised the tunic to be worth $2,000 to $3,000 told the Globe and Mail, “It was very, very difficult for me to catalogue [the tunic], because of its relation to a terrible period of history, the death of any child is horrific.”

When Jamieson died in 2011, his fiancée Jessica Phillips took to selling his collection, which also included authentic shrunken heads and necklaces made of human teeth. Though she says she agrees the tunic is a piece of history, it is up to the executors to decide where it ends up.