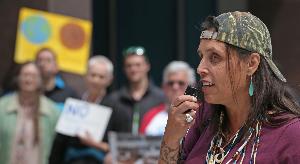 Indian rights lawyers argue that a Sandpiper spill could endanger their rights to gather wild rice.

In a new battlefront over energy policy, American Indian rights attorneys argued Wednesday before a Minnesota judge that historic treaties give tribes a say in where to build crude oil pipelines across land ceded by the Chippewa in the 19th century.

“Everybody has kind of forgotten what our rights are, and that is why we are here,” Frank Bibeau, an attorney for the Indian nonprofit group Honor the Earth, told an administrative law judge at a hearing in St. Paul.

For the first time in Minnesota, Indian rights attorneys are arguing that the state Public Utilities Commission (PUC) lacks unilateral authority to approve pipelines. They want the state to reject the proposed route of the Sandpiper pipeline from North Dakota, and have offered an alternative path.

Attorneys for the company contend that the commission has no business deciding the meaning of federal treaties. Even so, much of the two-hour discussion before Judge Eric Lipman focused on 10 treaties signed between 1825 and 1864 by Minnesota Indian tribes.

“It would represent a dramatic departure from the commission’s precedent and would significantly impact not just pipeline projects but all large energy projects sited in northern Minnesota,” said Christine Brusven, an attorney for the Calgary-based pipeline company that’s proposing to build the 610-mile pipeline to carry North Dakota oil.

Headed for the courts?

Lipman, who is overseeing the regulatory review of the pipeline, is expected to rule on the treaty rights question, but the final decision rests with the Public Utilities Commission. The issue ultimately could land in federal court.

Before the hearing, about 45 Honor the Earth supporters, led by the group’s leader Winona LaDuke, demonstrated outside the PUC’s office.

Some Minnesota tribes have successfully asserted off-reservation rights under 19th century treaties. The U.S. Supreme Court in 1999 affirmed that the Mille Lacs Band of Chippewa and seven other Chippewa bands retained hunting, fishing and gathering rights under an 1837 treaty on lands and lakes ceded by the tribes in central Minnesota, including Lake Mille Lacs.

Similar rights have been recognized under other treaties, and state and tribal governments share responsibility for game management in some ceded areas. This year, the Fond du Lac Band of Chippewa is exercising rights under an 1854 treaty to spear walleyes in several lakes in northeastern Minnesota’s Arrowhead region.

“We are not saying we have an absolute veto,” Bibeau said in an interview.

Prof. Peter Erlinder of William Mitchell College of Law, who also represents Honor the Earth, said various treaties “need to be accommodated by state regulatory activities.” He said the state and tribes need to find a way to cooperate on pipeline siting.

But Enbridge attorney Randy Thompson, who represented Lake Mille Lacs landowners in the 1999 case, said Honor the Earth overstates the reach of the landmark decision.

“We have very little idea where it is going to go,” said James Coleman, an assistant professor of energy law at the University of Calgary and Haskayne School of Business.

In the state of Washington, a tribe with rights to fish for migrating salmon has successfully argued that the state Transportation Department must repair hundreds of culverts that block the passage of fish. Federal judges, most recently in 2013, have ruled that the barrier culverts violate treaty promises. Another federal judge in that state upheld in 1996 the U.S. Army Corps of Engineers’ right to deny a permit for a fish farm because it conflicted with the Lummi Nation’s treaty fishing rights.

Most treaty cases have been decided in federal court. Honor the Earth’s legal battle is unusual because it’s in a state regulatory proceeding. Bibeau said he reserves the right to take the case to tribal or federal court later.

In two previous Minnesota utility cases, tribes tried unsuccessfully to assert tribal authority over proposed pipelines or power lines. In 2011, the Leech Lake Band of Ojibwe objected to a proposed transmission line that skirted tribal lands, but lost in federal court. The Fond du Lac Band of Lake Superior Chippewa objected to another pipeline in 2007. That project, like the transmission line, eventually won approval of the PUC.

Coleman, who grew up in the Twin Cities, said Indian activists face a difficult legal battle in the pipeline case. Unlike the Washington cases, he said, where judges saw actual harm to treaty-protected resources, the Minnesota concerns are about a potential situation, and depending on how bad the disaster was, maybe at some point it could eliminate those treaty rights.