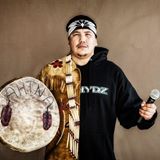 Samuel Johns likes to refer to himself as an artist, a storyteller. He raps, plays traditional Athabascan drums, and gives motivational talks to inspire youth. Johns grew up in Copper Center, a depressed Alaska village on the road system. He cites the availability of liquor in the village as one of the downfalls of the community.

“Growing up in the village, it’s good for some people. Some people find their peace in the wilderness and (aren’t) affected by addiction. But then when they are caught in that life, it could kill them.” It’s a story Johns knows well; many of his friends and family in the village have died after getting stuck in addictions.

“Growing up in the village is hard,” Johns said. “That’s why I have the ability to share my story, because I know where some of those kids are at.” With few opportunities and an epidemic of alcoholism in rural villages, Johns became depressed and after an alcohol-related death in his family he fell into drinking. He finally gave into the depression and desperation he had been feeling and drank away five years of his life. Johns now sees clearly that there has been a lack of sober male role models in his community. He didn’t have a role model and acknowledges that even he wasn’t present for his first daughter during his years of drinking.

Johns now wants to help change that environment for the younger generation living in Alaska Native villages. Through his positive message raps, he’s trying to reach youth in a way that’s relevant to their lives.

“Everybody has heard everything on the radio and I’m the exactly opposite of that,” he said. “Rappers, they talk about cars, money, making it rain. People can fantasize about it, but they won’t have a real connection. But when it comes to lyrics about domestic abuse, they can picture that in their mind if they’ve been around that. They can picture it, they can feel it because it’s real. My target is the younger generation. So they can listen to it and say, ‘Man, I kind of want to make a difference in my community.’”

Johns, who has been sober for almost seven years now, feels that in the village he never found a healthy way to grieve for the deaths of loved ones. Since January, Johns has been bringing his traditional drum to Bean’s Cafe to play traditional music for the homeless community, many of whom are Alaska Native. He plays music for them to “reconnect them to their lost identity.” He says the drumming is healing and traditionally a way to unite people. It’s his way of helping people heal and connect to their Native history.

You can see Samuel Johns’ videos on his YouTube channel.