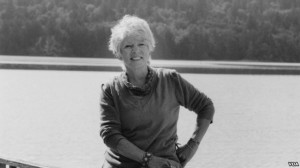 OYSTER BAY, WASHINGTON — The discovery of long-forgotten gravestones in a thicket of bramble and alder set one author on the trail of a singular Native American woman and oyster farmer who lived in 19th century Washington state.

The book that resulted is inspiring others to reveal the stories of people who’ve been out of the nation’s collective history.

The waterfront cottage LLyn De Danaan calls home in Oyster Bay, Washington State, overlooks a cultural crossroads that is rich in history. She’s a cultural anthropologist whose eyes and ears are attuned to the signs and stories of place.

De Danaan, who moved to the area in the early 1970s, heard so many tales about pioneer Katie Gale ‒ independent businesswoman who owned property and tidelands in her own name in the late 1800s ‒ that she started a file on her.

“That was all a little bit unusual from conventional wisdom, and things I had heard about both people in the oyster business and Native American women,” De Danaan said.

She was fascinated by Gale’s ability to straddle different worlds, standing up for herself and her mixed-race children.

“I suppose there just were too many things about that that intrigued me that I couldn’t let go of it,” De Danaan said. “I literally could not let go of it for years.” 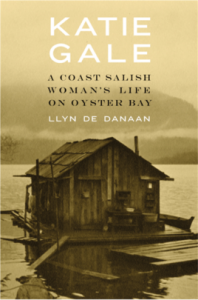 A turning point came when De Danaan and several friends from the historical society discovered an overgrown homestead graveyard not far from her house. One of the headstones belonged to Katie Gale.

“I was so amazed, excited, [and] enthralled that I began beating on Stan’s shoulders as he was kneeling in front of me holding this stone,” she said. “I literally said, ‘I know who this is,’ as if she were an acquaintance of mine. But it almost felt that way. I would say that was a moment of calling. I have to tell this woman’s story. I have to know her.”

But the long-dead Gale left no letters or journals. De Danaan found no photographs or living descendants. The best source material was a divorce case file.

But the tale doesn’t stop there.

The biographer is a guest speaker in a writing class at the Evergreen State College Longhouse in Olympia. She encourages students to bring forth stories before they are lost, perhaps starting with family history. It’s a message De Danaan returns to again and again in regular public talks and one-on-one mentoring.

“You are able to find out a lot,” she told the young people, “more than you think.”

All of the students this day are Native American. It takes awhile, but eventually sensitivities come out.

“I was really hesitant about taking the class,” said Melissa, a student who attended.

Her grandmothers warned against exposing too much of their Spokane tribal heritage to outsiders for fear they might twist or exploit it.

Makah tribal member Vince Cook heard that from his elders, too. “That is a tough one, because when I was younger we were told not to record, not to videotape.”

Cook says attitudes are changing now as people see tradition and culture slipping away. He feels spurred to write about his great grandmother and all the things she taught him.

“I think it is important to continue on, not only for myself, but for my family and for others to know about the Makah culture and to keep it alive,” he said.

Other Native Americans also recognize the urgency of gathering history before it’s lost.

Amateur folklorist Si Matta focuses on gathering the stories of his ancestors from the Cascade (Watala) Indian tribe that once lived and fished in the Columbia River Gorge.

He’s using modern means to collect the old stories, by soliciting and sharing material and photographs via a website and Facebook page.