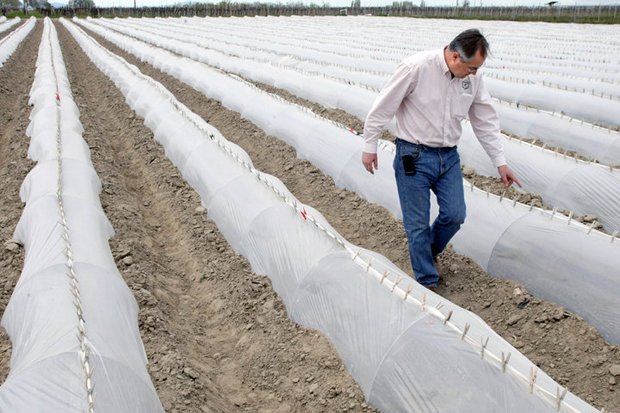 Alan Schreiber walks through rows of organic cantaloupe on his farm in Franklin County, Washington. Schreiber has applied to grow marijuana in Washington but is concerned about federal water resources. BOB BRAWDY — TRI-CITY HERALD

By C.R. Roberts, The News Tribune

Nobody seems quite sure of the answer: Will the federal government withhold services to the state, given the conflict between legally grown marijuana in Washington and a national drug policy that finds marijuana illegal?

If the answer is yes, then they won’t, in line with federal law.

With something of a wink and a nod, the U.S. Justice Department has provided soft guidance that conditionally allows financial institutions to do business with the marijuana industry. In the same way, utilities and regulatory officials could allow the provision of water and power if Congress could pass legislation the recognizes the will of Washington voters.

The manufacture of one joint – a marijuana cigarette – will produce 1.5 kilograms of CO2 emissions, equal to the emissions of a 44-mpg hybrid car driving 22 miles. The energy used is equal to that used to produce 18 pints of beer.

U.S. electricity use for cannabis production is the equivalent of 1.7 million average homes, or the production of seven average U.S. power plants.

Of the total wholesale price of U.S.-grown marijuana, 49 percent goes to energy.

“While the implications of I-502 for the criminal justice system, land use, taxation and many other issues have been widely debated, the potentially significant changes in electricity and water use that are likely to follow I-502’s implementation have received almost no scrutiny,” wrote Eric Christensen, of the local firm Gordon Thomas Honeywell, in a blog post last month.

He goes on to say that because marijuana remains illegal under federal law, “legalization creates a new set of legal risks for utility service providers.”

Some utilities say they’re ready for the risks and implications. Maybe.

More questions: Is Bonneville concerned about the draw on the electrical grid? Has the use of electricity by growers and processors been discussed? Have plans been developed? Will marijuana cultivation and sale have any effect on Northwest power?

“While we are beginning to look at what potential impacts might be, we are not prepared to discuss those issues at this time,” replied BPA spokesman Doug Johnson to an inquiry last week.

Will the utility continue to supply “federal” power to Washington utilities that serve the cannabis industry?

“We are currently exploring these issues. Again, it is too early to discuss the potential policy implications or details of those discussions,” Johnson wrote.

In reality, electricity is already being supplied to the industry.

The greatest effect so far has fallen on Pacific County, home to Raymond, Long Beach and the aptly named Tokeland.

There, an entrepreneur has applied to use 20 megawatts of electricity, which works out to 40 percent of the county’s entire electrical load.

“We have contacted Bonneville (Power Administration), and we are working with Bonneville to build a new substation,” said Jason Dunsmoor, chief of engineering and operations for the Pacific County PUD.

“They will have their own substation,” he said, estimating that the infrastructure cost for the facility and the transmission line will cost some $3 million.

“We’re just providing the service,” he said. “The concern of everybody who invests is that the federal government could change its mind.”

Including the Pacific County facility, by last week the state Liquor Control Board had approved license applications for marijuana processors in 17 counties.

“We are going to get together and do some inquiries. We haven’t had any specific inquiries. We’ll be taking a look at it and discussing it,” said Karen Miller, communications manager at the Benton County Public Utility District.

“We’re looking at it and trying to make sure we understand all the ramifications and impacts,” she said.

Deb Bone-Harris, Franklin County community and government relations manager, said her utility has “not heard a concern about federal power being an issue. We’d have to deal with that if the time an opportunity were to come up.”

“There has been no formal discussion or agenda item related to this issue at the board level,” said Neil Neroutsos, spokesman for the Snohomish County PUD.

“We are confident we have the capacity and resources to provide energy to any new customers who need our service,” he said.

“There have been conversations about the topic,” said Chris Gleason, spokeswoman for Tacoma Public Utilities.

“The interesting thing for us, and for other utilities, the ones who buy power from Bonneville, is whether Bonneville can supply to customers who are supplying to a service that is illegal in most parts of the country,” Gleason continued. “Bonneville is having the discussion about it.”

The answer resides in the other Washington.

Said U.S. Rep. Adam Smith, D-Bellevue, “I understand there are multiple conflicts between state and federal law as it pertains to marijuana. The only way to ensure that state law is recognized at the federal level is by passing the Respect for State Marijuana Laws Act. I am a co-sponsor of this legislation and will continue to advocate for the federal government to recognize and respect our state law.”

“The unintended consequences continue to rise,” he said last week. “My overall impression, once 502 passed, was ‘Oh my gosh, we’re going to have quite a mess on our hands.’ ”

Nealey said he has asked a Bonneville government liaison specialist about the threat to deny power to the industry.

“She gave me a straight answer,” Nealey said. “We are aware of that problem and the legal department is working with that right now.”

“Part of the question we’re all asking – is this a big deal or not?” said Chuck Murray, senior energy policy specialist at the state Department of Commerce. “That’s because we have no idea how much energy is being used by illegal grows that are hidden from us.”

“My big concern is how much power is going to be required, but it’s very uncertain,” said Chris Robinson, power management manager at Tacoma Public Utilities.

“As a practical matter, we all know there are a lot of illegal grow operations. A lot of them are using Bonneville power already. Many of them are stealing power,” said Eric Christensen, an attorney at Gordon Thomas Honeywell and author of a recent blog post concerning cannabis cultivation and the law.

Some of that theft may go away once a legal network has been established.

Still, he noted the presence of “a number of potentially serious pitfalls for providers of services to marijuana growers, including utilities and irrigation districts.”

For off-the-grid operations that consume power from private generators, Mills estimated that one marijuana plant requires 70 gallons of diesel fuel, or 140 gallons of gasoline used with smaller, less efficient generators.

Sources of energy use include an obvious list with lighting, heaters, humidifiers, de-humidifiers and such, but also include other, less obvious sources, including vehicles, CO2 generators, pumps, filters, fans, security stations and ozone generators.

In its 2013 report “Environmental Risks and Opportunities in Cannabis Cultivation,” BOTEC, the firm hired by the state to assist in developing rules regarding the implementation of I-502, said “environmental considerations should not be a major component of marijuana policy, but are worth explicit attention and policy design.”

Meanwhile, federal agencies could flummox the whole thing by threatening banks or by denying water or electricity.

“It’s clear that the federal approach to the war on drugs is a complete failure,” said Christensen at Gordon Thomas Honeywell.

“The federal government,” he said, “should at least give us enough space to see if the Washington experiment will work.”