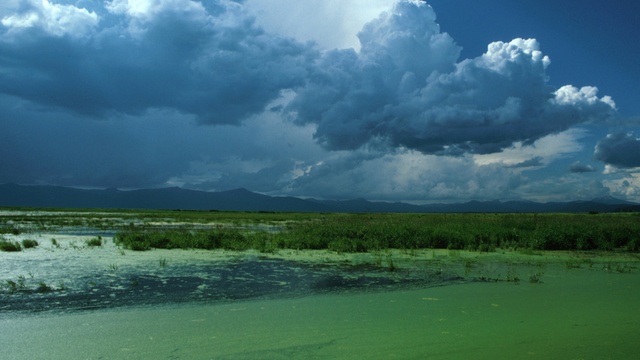 Klamath Lake. New legislation in the U.S. Senate would enact a water-sharing agreement and authorize the Interior Department to carry out the terms of a new agreement signed by tribes, ranchers and other stakeholder groups in the Upper Klamath Basin. | credit: U.S. Fish and Wildlife Service

U.S. senators from Oregon and California introduced legislation Wednesday that’s aimed at restoring the Klamath Basin ecosystem and enacting a water-sharing agreement in this arid region that straddles the two states.

The legislation puts into law the Upper Klamath Basin Comprehensive Agreement, an accord that was negotiated and signed last month by ranchers, tribes, and federal and state officials, according to a statement issued by Sens. Ron Wyden and Jeff Merkley, D-Ore., and Dianne Feinstein and Barbara Boxer, D-Calif.

“The people of the basin have set aside their differences for the benefit of the region,” Wyden said in the joint statement from the four senators. “Congress should follow their example, pass this legislation and put the Klamath Basin on the road to recovery.”

The Senate bill gives congressional authorization to the U.S. Interior Department to act and achieve the agreement’s benefits. That includes a water-sharing agreement for ranchers and farmers, tribes, native fish runs and bird refuges. It also puts into law a plan to improve and protect streamside areas and provides economic aid for the Klamath Tribes and their members.

In all, the Klamath Basin restoration is expected to cost about $495 million in federal spending. The bill also clears the way for the removal of four hydroelectric dams from the Klamath River, with the Secretary of the Interior making the final decision. Experts say that would be the largest dam removal in history.

Last summer, Oregon Senator Ron Wyden brought stakeholders together to rework the restoration agreements. They had been previously drawn up but never passed in Congress.

The legislation will be referred to the Senate Energy and Natural Resources Committee, where Wyden is a member and the former chairman.