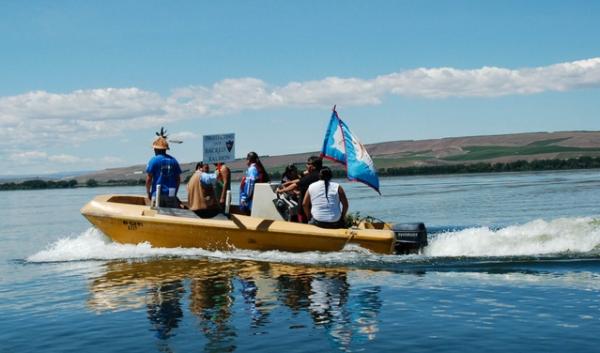 Yakama Nation fishers and tribal leaders hopped on boats to the fishing site. As a protest, they dropped a net right next to the proposed Morrow Pacific coal export facility. | credit: Courtney Flatt

BOARDMAN, Ore. — Yakama Nation tribal members took to the Columbia River Tuesday to protest a proposed coal export facility in eastern Oregon. The tribe says the export facility would cut fishers off from treaty-protected fishing sites along the river.

More than 70 people held signs and waved flags on the banks of the Columbia River, just downstream from the proposed Morrow Pacific coal export terminal.

Fishers and tribal leaders rode boats to the treaty fishing site, dropping a fishing net right next to the proposed coal export facility to assert their treaty fishing rights.

Yakama Nation Chairman JoDe Goudy has fished the Columbia River since he was 6 years old. He said the proposed coal export terminal would threaten the river, fish, and the tribes’ treaty-protected fishing rights.

“We believe that an attack on these things is an attack on our very essence and our way of life,” Goudy said.

Ambre Energy, the company backing this export terminal, has said the project will not interfere with treaty fishing rights.

Goudy said the tribe isn’t concerned about whether any company chooses to acknowledge treaty fishing rights.

“[Our fishing rights] exist, regardless of what they wish to say on black and white, or on anything that they can document. We live it. We see it. We know it. We practice it on an annual basis. We practice it when the fish come. We go where the fish are,” Goudy said. 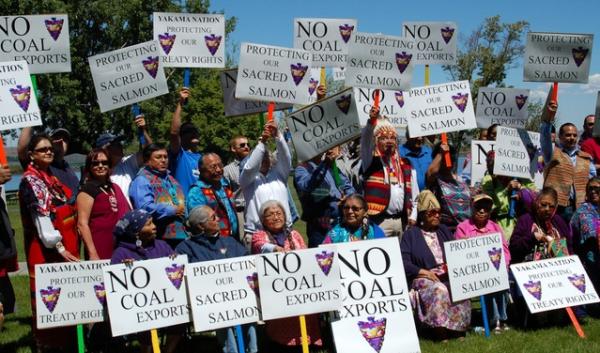 Yakama Nation fishers and tribal leaders hopped on boats to the fishing site. As a protest, they dropped a net right next to the proposed Morrow Pacific coal export facility. | credit: Courtney Flatt

Members from the Lummi Nation also traveled to the protest. The tribe is fighting another proposed coal export terminal near Bellingham, Washington.

The Morrow Pacific Project would transport about 9 million tons of coal per year from the Powder River Basin to Boardman in eastern Oregon. Coal would then be barged down the Columbia River to Clatskanie, Oregon. From there, it would then be transported to Asia.