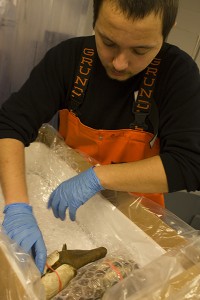 As a result, China announced it was ban- ning all imports of bivalve shellfish from Washington, Oregon, Alaska and North- ern California. This was just before the Chinese New Year, a lucrative time for harvesters and buyers, when geoducks are traditionally served.

“It was bad at the beginning because we didn’t know what was going on,” said Tony Forsman, general manager of the Suqua- mish Tribe’s Suquamish Seafoods, which regularly ships shellfish internationally. “China didn’t tell us for two weeks they were doing this.”

Officials from the National Oceanic and Atmospheric Administration have been working with Chinese officials to deter- mine how they came to their conclusions and have been in close communication with Washington Department of Health and western Washington tribal officials about the progress.

“We’re working with China to figure out why we suddenly don’t meet their stan- dards,” he said.

In the meantime, harvesters and buyers are continuing to send their catches to oth- er Asian countries, including Vietnam. U.S. officials are asking China to reduce the ban area from the West Coast to just the two original areas of concern.