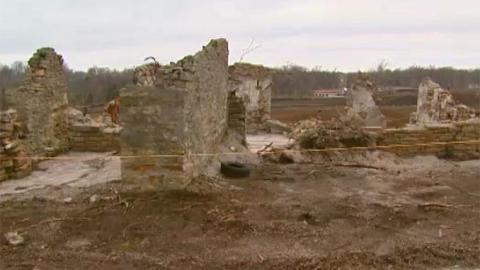 Narragansett Indian Reservation, United States – On an unmarked country road in New England, a faded sign welcomes visitors to the Narragansett Indian Wetuomuck Community Village. But what lies ahead is more akin to a graveyard. Instead of the community promised by the sign, 12 empty homes sit in a field swallowed up by weeds. The only hint of life is the dull hum of a distant highway.

It was on this patch of land that, in 2009, the US Supreme Court crippled the socio-economic aspirations of the Narragansett Indian tribe – and others across the country. The legal battles started when Rhode Island state authorities objected to the Narragansett tribe’s plan to build a low-income housing complex on 31 acres of land adjacent to its modest reservation.

In response, the tribe moved to place the land into federal trust, which would have freed it from most local regulations and taxes. Rhode Island tied up the application with lawsuits, saying the Narragansetts would eventually build a casino on the land – a claim the tribe denies.

“If you cut off resources to a group, that’s how you conquer them,” Narragansett tribal councilman Cassius Spears Jr told Al Jazeera. “That’s been the state of Rhode Island’s policy for hundreds of years: They want to dissolve the tribe.”

The Narragansetts held off the state until the case reached the Supreme Court. In its 2009 Carcieri v. Salazar ruling, the court decided that the government could only put land into trust for tribes that were “under federal jurisdiction” in 1934 – the year the procedure was established. Since the Narragansett tribe was federally recognised only in 1983, the government’s decision to accept their land trust application was ruled invalid.

The Carcieri ruling denied the Narragansetts and potentially scores of other tribes’ access to one of their most effective tools for development. Five years later, the results are being felt across Indian country.

Matthew Thomas packs a wooden pipe, takes a puff, and raises the smoky offering up to the sky. The Narragansett chief’s feathered headdress sways as he repeats the blessing. Beside him, dancers decked in traditional regalia wait for the pow-wow drumming to start.

This is how many outsiders picture an Indian chief’s duties. But during his 16-year tenure as leader of the Narragansetts, Thomas has spent far more time battling for his tribe in courtrooms. By now, he said, the tribe has spent millions of dollars on legal fees.

“If we could utilise the money that we had to take to fight the state and everyone else, we probably could’ve done very well with other forms of economic development,” he told Al Jazeera. “The states and the towns have deeper pockets than us, so it’s easy for them.”

The Narragansetts are not the only ones struggling with litigation. The Carcieri decision has been followedby more than 15 federal lawsuits challenging Indian land rights.

“The court’s ruling has been at the bottom of much delay in the trust land acquisition process,” Robert Anderson, an Indian law expert at the University of Washington, told Al Jazeera. “Uncertainty and delay is the enemy of economic development.”

No one knows how many tribes could be impacted by the Carcieri decision, as there is no agreement on what it means for a tribe to be “under federal jurisdiction”. Some courts have taken it to be synonymous with being formally recognised as a sovereign tribe by the federal government. If that view persists, dozens of tribes could be excluded from the land trust system. Earlier this year, a federal court effectively preventedthe Big Lagoon Rancheria tribe from building a casino on trust land because the tribe was not federally recognised in 1934.

“Under the constitution, the courts should defer to Congress on its views of Indian affairs and its relationships with Indian tribes,” John Dossett, an attorney with the National Congress of American Indians, told Al Jazeera. “Part of the concern is that the Supreme Court’s becoming a little bit unmoored from that and is kind of making up its own ideas about what it thinks federal Indian policy ought to be.”

Native Americans once roamed the area that is now called Rhode Island. Today, the Narragansett reservation is limited to a few thousand acres, most of it swampland nestled in thick forest. And under a 1978 agreement with the Rhode Island government, what little land the Narragansetts do have is subject to state jurisdiction.

States covet the potential tax revenues generated on Native American land. When the Carcieri ruling was issued, then-Rhode Island Attorney General Patrick Lynch gushed. “[T]his decision is a tremendous victory for the State of Rhode Island … and for the importance of states’ rights across the United States of America,” he said in a statement issued at the time.

Such statements evoke the domineering paternalism that has characterised state-tribe relations. Without the regulatory and tax exemptions the land trust system confers, Native Americans cannot take control of their development, said Spears.

“The main intent is to be able to put land under our sovereignty as a nation so we could be self-contained for the benefit of our people,” he said. “Any kind of economic venture that we’ve put forward has beenchallenged by the state and put in court.”

Native American self-rule makes economic sense. Research by Harvard University and the University of Arizona concluded that tribal sovereignty is “the only policy that has worked to make significant progress in reversing otherwise distressed social, cultural, and economic conditions in Native communities.”

But for the Narragansetts, this is about more than economics. In their view, land means cultural survival.

“Without the ability to put land into trust, we cannot gain land and put it under our jurisdiction that will allow us to have access to traditional life ways,” Spears said. “Our clams and quahogs, going out and getting blue shell crabs, gathering bulrush to make mats for our traditional homes – we now have to fight for public access to try to find those areas. If we don’t have land, our culture is at the point where it cannot be practiced without permission from outside societies.”

Relief from the legal tussles may be coming. The Supreme Court did not offer detailed guidance on how authorities should determine which tribes were “under federal jurisdiction” in 1934 and are therefore eligible to use the land trust system. In response, a Department of the Interior solicitor recently issued an opinion outlining a new research procedure for deciding which tribes qualify and which ones do not.

Under the new system, tribes which had continuous relations with the government, or participated in government-administered programmes as of 1934, will likely be able to use the land trust system even if they were not formally recognised as a sovereign tribe at the time.

Most if not all 566 federally-recognised tribes should be able to satisfy the new criteria, Anderson said. He added that “the best solution” would be anew law unequivocally allowing them all to use the trust system, regardless of what their status was in 1934.

“The solicitor’s opinion simply makes the best of a bad situation,” Anderson said. “Courts could disregard it, and every tribe arguably not ‘under federal jurisdiction’ in 1934 would have to obtain an administrative ruling on their status that could then be litigated in court by any who disagree.”

For now, the fate of the land that sparked the Carcieri case is uncertain. Thomas “likes” the solicitor’s opinion but expects further litigation if a new law is not passed soon.

“I think tribes are going to have to unite,” he said. “Due to the makeup of the Supreme Court and the way they’ve treated the native people of America for years, it’s just getting out of control.”