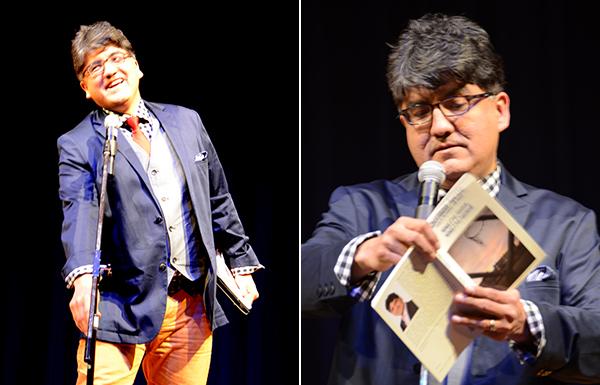 Photos by Jack McNeel
A dapper Sherman Alexie on stage in Spokane, Washington.

Sherman Alexie could make a very good living strictly as a humorist — he’s that good. A large crowd in Spokane recently laughed themselves to tears through an hour and 45 minute routine on subjects ranging from his books being banned, body hair, funerals, gay marriage, basketball, his family, and more.

Nobody was spared as Alexie interacted with the crowd and his own family members, and he laughed at his own “inadequacies”. “When you’ve been married 20 years you have to spice things up. I’m getting older. I’m middle aged — 47. I’m at the age now that I need more foreplay than my wife. Honey, if you listen to some of my worries and fears for the next 15 minutes I’ll be ready.” The crowd exploded in laughter and Alexie joined right in.

“This last year I feel like I’ve aged dramatically. I have more body hair than any Indian guy is supposed to have. I keep thinking one of my grandmothers lied. One of my grandmothers was getting it on with a Jesuit. I can just feel it. I’m like a little bit Catholic,” he laughed and the crowd roared.

“The hardest part are the random hairs. I’m getting ear hair. I’m getting gray nose hairs. You can’t hide them because it’s dark in your nostrils. It doesn’t matter what color you are as a human being, nostrils are all the same. Our nostrils are really multi-cultural.”

The dialogue continued, the stories getting wilder as he progressed and a bit more “colorful.”

His book The Absolutely True Diary of a Part Time Indian was recently challenged by a school board in Meridian, Idaho. “People would stand up and testify against my book. One woman was like, ‘these children come from our wombs!’ It’s funny but it’s sad,” Alexie said. “Apparently she thought we didn’t know that! I think we need to have ‘The Talk’ with Meridian.”

Alexie explained that “an amazing, courageous student, Brady Kissel,” testified at the meeting and had a petition signed by 350 students asking that the book not be banned. Another young lady raised enough money to purchase enough money to buy 350 of the books, which they distributed at a city park in Boise.

“The craziest part of it is that as they were distributing the books one of the parents called the police and said kids were distributing pornography in the park,” Alexie explained. The police arrived, checked it out, and left. Sherman’s publisher heard of this and sent an additional 350 copies to be distributed free.

This novel won the American Library Association’s 2009 Odyssey Award as the best new audio book for children and young adults.

The two young ladies were on hand at the event in Spokane. The author had them stand for well deserved applause.

Alexie himself was in town to support the Salish School of Spokane, a school dedicated to teaching Salish to youngsters. It’s the native language of local tribes but few elders remain who still speak fluent Salish. Money raised this night will go to support the school and Sherman donated his time to attract a large crowd.