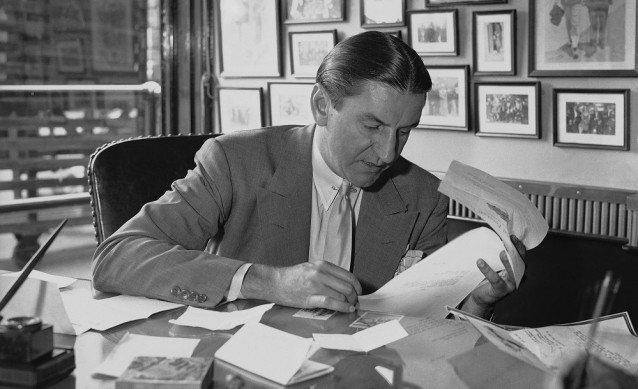 George Preston Marshall, founder and owner of the Washington Redskins, in 1935.
CREDIT: AP

As challenges against the name of the Washington Redskins have persisted for more than four decades, the team’s ownership and management has held on to a consistent story: that the team changed its original name, the Boston Braves, to the Boston Redskins in 1933 to honor its coach, William “Lone Star” Dietz, who maintained at the time that he was a member of the Sioux tribe.

But in a 1933 interview with the Associated Press, George Preston Marshall, the team’s owner and original founder, admitted that the story wasn’t true.

“The fact that we have in our head coach, Lone Star Dietz, an Indian, together with several Indian players, has not, as may be suspected, inspired me to select the name Redskins,” Marshall said in the AP report. The quote was originally referenced in a story on the team’s name at Sports Illustrated’s MMQB site. Jesse Witten, the lead attorney in a lawsuit challenging the legality of the team’s federal trademark protection, unearthed the actual AP report this week, and provided it to to Washington Post columnist Robert McCartney. ESPN’s Keith Olbermann reported it on his show, “Olbermann,” Thursday night. 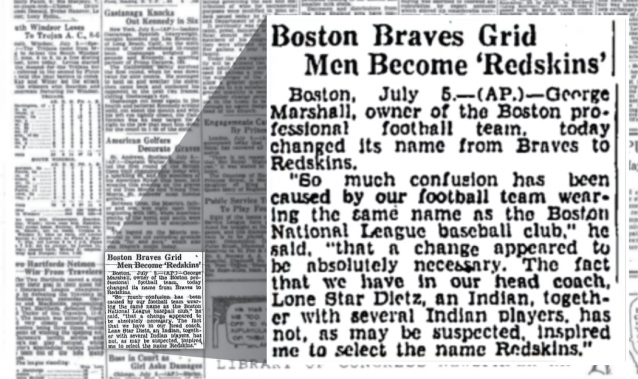 The team’s owner, Daniel Snyder, and top management have justified the team’s name as an “honor” to Native Americans in letters to fans and the public. So too has NFL commissioner Roger Goodell. And both have leaned on the story that Marshall chose the name to honor Dietz to make that case.

As some of you may know, our team began 81 years ago — in 1932 — with the name “Boston Braves.” The following year, the franchise name was changed to the “Boston Redskins.” On that inaugural Redskins team, four players and our Head Coach were Native Americans. The name was never a label. It was, and continues to be, a badge of honor.

The team has also used Dietz’s heritage — and the claim that the Redskins were named in his honor — to defend itself in the lawsuits challenging its federal trademark.

The NFL, too, has rested its case on that history. Goodell did so in a letter to 10 members of Congress who wrote him to challenge the name last June. The commissioner called the name a symbol of “strength, courage, pride, and respect” and specifically referenced Dietz’s role in the name:

In our view, a fair and thorough discussion of the issue must begin with an understanding of the roots of the Washington franchise and the Redskins name in particular. As you may know, the team began as the Boston Braves in 1932, a name that honored the courage and heritage of Native Americans. The following year, the name was changed to the Redskins — in part to avoid confusion with the Boston baseball team of the same name, but also to honor the team‘s then-head coach, William “Lone Star“ Dietz.

Asked for their response to the news clip, neither the NFL nor the Washington Redskins responded by the time of publication.

Dietz’s history was already in question at the time thanks to the work of historian Linda M. Waggoner, whose exhaustive account of Dietz’s life found that he almost certainly was not a Native American, as he had claimed. In fact, Dietz faced a federal trial alleging that he had falsely represented himself as a Native American to avoid the World War I draft. After the first trial ended with a hung jury, Dietz pleaded no contest to the same charges in a second trial and served 30 days in jail.

When ThinkProgress asked the franchise about the claims that Dietz was not a Native American last year, the team’s president and general manager, Bruce Allen, called the questions “ignorant requests” and suggested that we speak to Dietz’s family instead.

Amid scrutiny about Dietz’s history, the team has given the appearance of backing away from relying on the claim that he inspired the name. Notably, Allen did not cite Dietz or the origins of the name in his written response to a letter from Senate Majority Leader Harry Reid (D-NV) and 49 other senators who called on the team to drop “Redskins.”

If Marshall didn’t choose the name based on Dietz or the presence of Native Americans, what was his reason? As Olbermann notes in his report, the team chose its original name — the Boston Braves — because it shared a field with Boston’s baseball team by the same name. Marshall explains the AP story that he gave up the name “Braves” because it was too easily confused with the baseball team, and he chose “Redskins” to keep the Native American imagery as the team moved away from the Braves and into Fenway Park, the home of the Boston Red Sox.

Until recently, that story was more commonly told than the one about Dietz. In 1972, freelance writer Joe Marshall wrote a story on team nicknames in a promotional program from a game between Washington and the Atlanta Falcons. Joe Marshall didn’t reference Dietz in his story, instead writing that the team wanted to “change names but keep the Indian motif”:

The Redskins also copied a baseball team, the Boston Braves. George Preston Marshall started with his team in Boston on Braves Field. When he switched playing sites, he wanted to change names but keep the Indian motif. Since he was now sharing a park with the Red Sox and at the same time liked Harvard’s crimson jerseys, Redskins seemed appropriate. Redskins they have remained, a proud tradition. Until now, that is.

In that sense, it seems obvious that the name “Redskins” was chosen more as a marketing ploy than anything else, a way to tweak the team’s name without changing the image it had established. Regardless of the original motive, however, this much is clear: the story the team and NFL have used to justify the name’s existence as a “badge of honor” is not true, and the man who founded the team refuted it himself more than 80 years ago.