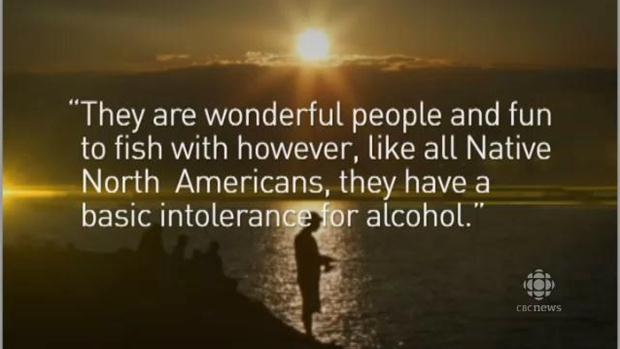 This passage in a brochure for Laurie River Lodge, a fishing lodge in Manitoba, sparked public backlash for advising clients against giving First Nations guides alcohol because they have a ‘basic intolerance’ for it. The brochure has since been removed from the lodge’s website. (CBC)

The stereotype that aboriginal people have a genetic intolerance to alcohol persists in Canada and around the world, but a Manitoba medical expert says studies show a possible predisposition to alcoholism really boils down to social conditions such as poverty — and that, says Dr. Joel Kettner, is what people should focus on addressing.

A Manitoba fishing lodge sparked a storm of controversy this week when one of its brochures advised clients against giving First Nations guides alcohol because they have a “basic intolerance for alcohol.”

But there is no scientific evidence that supports a genetic predisposition for alcohol intolerance in the aboriginal population, said Kettner, an associate professor at the University of Manitoba’s faculty of medicine and the province’s former chief public health officer.

There is no scientific evidence that supports a genetic predisposition for alcohol intolerance in the aboriginal population, says Dr. Joel Kettner. (CBC)

​The owner of Laurie River Lodge has apologized and removed the brochure in question from its website, but the stereotype seems to persist. CBC News has heard from readers who suggested that aboriginal people are missing an enzyme or are genetically predisposed to addiction.

“There will always be theories and research that will try and explain some of this in the way of genetics, as was the case in Germany in the ’30s and the case in the U.S. comparing Negro brains and white brains,” Kettner said in an interview Friday.

Kettner points out that there have been studies examining differences in alcohol tolerance for different ethnic groups, taking into account cultural, geographic and racial factors.

But when it comes to possible predisposition for alcoholism, “what those really boil down to, in almost all scientific analysis, is the social circumstances and social conditions — whether experiences with family, community or at a larger level, in society,” he said.

“There are many indigenous populations around the world that have been colonized and oppressed by settlers where we have seen the same patterns of poverty, of poor housing, disenfranchisement,” he added.

“There is increasing evidence that these are the factors that lead to poor individual health, poor social health, poor community health, and these are what we need to focus our attention on.”

Kettner said there are also studies that show high rates of alcohol-related diseases and injuries in some communities, both urban and rural, where there is a large aboriginal population.

‘Maybe we should be doing genetic analysis on people who continue to perpetuate stereotypical and racist myths.’— Dr. Joel Kettner

But he noted that “those trends are there with other populations, including Caucasian populations, in similar circumstances of disadvantage, or poverty or inter-generational experience.”

For Kettner, the persistence of the genetic stereotype is evidence that there is still much work to do in combating racism.

From a public health perspective, he said, it is an indication that there are educational, social and political issues that need to be addressed.

“Maybe we should turn the question around,” Kettner said.

“I know it might sound facetious, but maybe we should be doing genetic analysis on people who continue to perpetuate stereotypical and racist myths.”