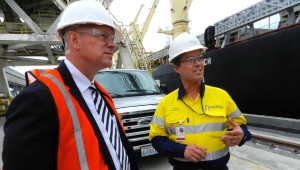 LONGVIEW, Wash. — A controversial coal export terminal proposed for this Columbia River town has a big supporter from the state of Wyoming.

Its governor was in Longview Tuesday to tour the old aluminum smelter where the The Millennium Bulk coal export terminal would move up to 44 million tons a year of Wyoming coal off trains and onto ships bound for Asia.

It’s a terminal he says is important to coal producers in his state – especially as the industry faces new regulations on coal-fired power plants in the U.S.

“That’s a lot of coal, but relative to the amount of coal we produce it’s 10 percent,” Mead said. “So this port and other ports are important to Wyoming in terms of the coal industry.” 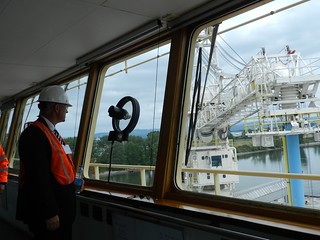 Gov. Mead on the bridge of a ship delivering alumina.

But what he calls “unreasonable” new regulations on coal-fired power plants in the U.S. are making it harder to expand coal markets here. Even before those rules came out, coal producers in his state had been looking for Asian buyers for all that Wyoming coal.

“We’ve got to have a continuation in a real way, in an economical way so these companies can keep going, and exports are part of that future,” Mead said.

Companies hoping to be part of that future have proposed a half-dozen coal export terminals around the Northwest. The three proposals still under consideration face a long permitting process and strong local opposition.

In addition to the Longview export project, coal and transportation companies want to build a train-to-ship facility for coal exports on Puget Sound north of Bellingham. The third proposal would involve transporting coal by train to barge to ocean-going vessel with two transport facilities on the Oregon side of the Columbia River.

In all they would help transport roughly 100 million tons of coal annually from Wyoming and Montana to Asia.

Mead said expanding the overseas coal trade with export terminals like Millennium will be good for the U.S. and its trading partners. But not everyone sees the benefits he does.

Mead’s visit sparked a protest from opponents of the Millennium project. Outside the terminal site, about 30 people gathered with a bucket of coal. 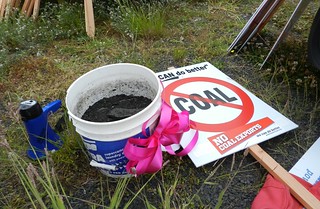 Protesters put a bow on a bucket of coal for Mead.

Diane Dick of the opponent group Landowners and Citizens for a Safe Community spoke at the protest. She said her group has a bucket of coal that came from Wyoming, and she wants to give it back to Gov. Mead while he’s in town.

“We believe his coal should be kept in the ground in Wyoming,” she said. “We don’t want it here. We don’t want it shipped to Asia, where it will be polluting the skies in Asia and will blow back pollution and creating poisonous air for us.”

Mead followed the terminal site tour by meeting with a group of Washington legislators in Longview. He said he wanted to hear their concerns and help answer their questions to build support for the Millennium project.