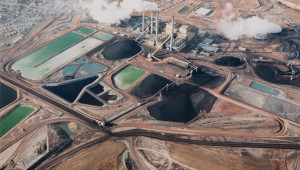 This image of the coal-fired plant in Colstrip, Mont., was made in the 1980s by Montana native David T. Hanson. It was part of an exhibit at Modern Museum of Art in New York. | credit: David T. Hanson |

SEATTLE — The Obama administration’s new rules to cut carbon emissions fueled energy sector leaders’ conversations about the future of coal in the West during their gathering here this week.

The Western Conference of Public Service Commissioners on Wednesday wrapped up its conference — a gathering of the people who decide where the region’s power comes from and how to regulate it.

Now that the Environmental Protection Agency is proposing that states cut CO2 emissions from power plants by 30 percent over the next 16 years, regulators are turning their attention to coal. Does it have a future?

“The answer is a resounding yes, the question is how much?” said Travis Kavulla with the Montana Public Service Commission. He’s one of the guys calling the shots on what kind of power his state produces, and what it will cost consumers. Montana mines and burns a lot of coal. So, as you might imagine, Kavulla’s not too pleased with the EPA right now.

“The bottom line is that the EPA seems set on establishing state by state goals, based on particular building blocks, a particularly infantilizing term, I think,” he told the crowd.

The “building blocks” include boosting energy efficiency, getting more renewable energy on the grid and using less coal.

Puget Sound Energy, an investor-owned utility based in Bellevue, Washington, gets more than 15 percent of its power from Montana coal. PSE is under mounting pressure from voters and the state government to kick its coal habit, and the new EPA rules add to that pressure.

“It’s very easy for part of our country to be rejoicing after yesterday and say ‘There, we’re just going to shut it all down.’” Well, that’s not going to work,” said Kimberly Harris, president and CEO of Puget Sound Energy. “You cannot just shut down coal units and expect for the grid to continue to operate. And we have an obligation to serve.”

Harris says that transitioning off of coal is possible, but it will take time – and states will have to work together.

“Any type of a retirement has to be transitional because we have significant decisions to make and investment and planning to do as a region. This really needs to be a regional approach,” Harris emphasized.

Washington’s in good shape to meet the EPA requirements, pretty much just by phasing out its only coal plant, which operates in Centralia. But Montana is going to need help lowering its CO2 emissions and getting more renewables online.

But who will will pay for it?

“From an investor’s point of view, all of this looks like a giant investment opportunity,” said Mike Weinstein, an investment analyst with UBS Securities in New York.

Weinstein said investors will be looking to throw money at new technology to cut CO2 emissions at the smokestack or sequester those emissions underground.

Some other winners, according to Weinstein? Renewable energy, natural gas and maybe nuclear power.

He also stressed the role of energy efficiency in helping utilities meet the EPA requirements, and keep costs down.