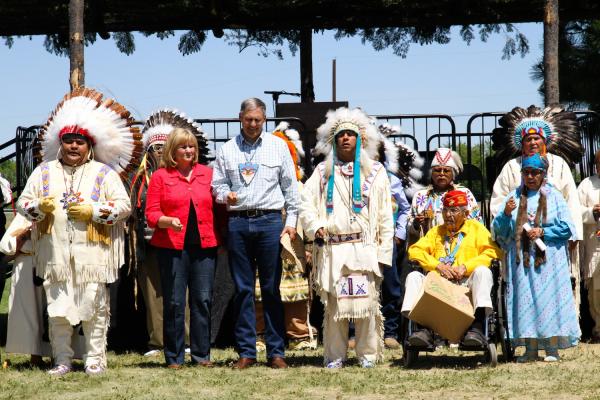 Washington state Governor Jay Inslee and his wife, Trudi, took part in the Yakama Treaty Days Parade on June 9, recognizing the Treaty of 1855 between the U.S. and the Yakama Nation. Governor Inslee stopped frequently to shake hands and exchange a few words with onlookers, as he made his way to the podium to join Tribal Council Chairman JoDe Goudy, who rode behind him on horseback in full regalia, and Navajo Code Talker Kee Etsicitty.

The parade included a rodeo, pow wow, golf tournament, softball tournament, salmon bake and some unofficial business — talks between the the governor and tribal leaders were held on the grounds of the Yakama Cultural Center. A group of young dancers, the Swan Dancers, also honored guests with a Welcome Dance.

Chairman Goudy proclaimed June 9 as “Governor Jay Inslee Day”’ for his commitment to the Yakama Nation. Goudy presented Inslee with a copy of the original treaty and the tribe gave, “so he could read it over and over and over again,” Goudy said.

The softball tournament was held a few blocks away and 14 teams participated. Most of the men’s teams were made up of players from different tribes. But team “Tribes,” from the Yakama Nation, took first place, and in second were the Muckleshoot “Warriors.”

On the women’s side, the Silver Bullets, made up of players from various reservations throughout Washington, Oregon and Idaho, took first place and the Ice Ice Natives from Elwha finished in second. The winners received sweaters and a $400 payout.

Eighty golfers from 13 tribes gathered at the Mt. Adams Country Club. Golfers had the option of playing in a 4-man scramble tournament, divided between duffer and stroker divisions. They also had the option of singles match play.

The pow wow was held about 20 miles away at White Swan. Dancers gathered from far and near for the two-day event. The indoor pavilion was filled and vendors surrounded the building selling everything from frybread and Indian tacos to jewelry and beadwork. An adjacent building held stick game competitions.

Miss Yakama Nation, Jeanetta Garcia, and Junior Miss Yakama, Abigail Totus, were both presented at the parade and at the pow wow along with young royalty from other tribes.

The Treaty of 1855 involved all 14 bands of the Yakama Nation. Representatives of those bands make up the Tribal Council. The population is now upwards of 10,000 members on the 1.2 million acre reservation.